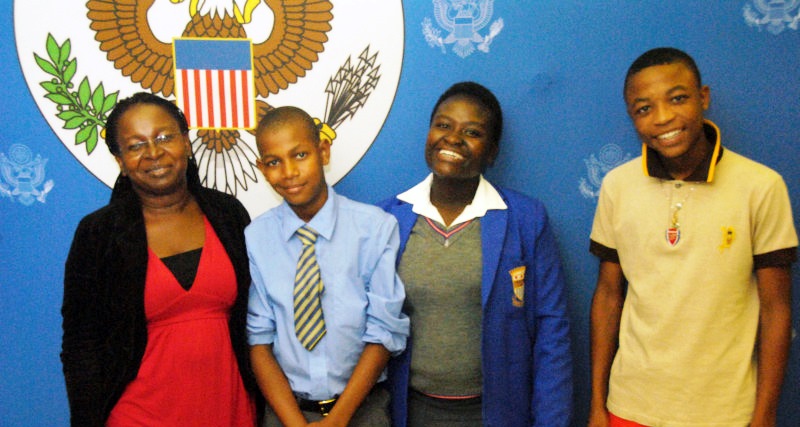 Brian Sibanda, right, with colleagues who traveled for the PAYLIP program in 2014

Harare, December 13 2016: Brian Sibanda, an alumnus of the English Access Micro-scholarship Program (Access) and Pan African Youth Leadership Program (PAYLP), has been accepted at Pomona College in Claremont, California in the United States on a full scholarship.

Brian was enrolled in the two year English Access program managed by Hope for a Child in Christ (HOCIC), a Bulawayo based NGO that caters for vulnerable children, orphans and youth. The Access program provides a foundation of English language skills to bright, economically disadvantaged 13-20 year-olds through two years of after school instruction and intensive sessions. Access students also gain an appreciation for U.S. culture and democratic values through enhancement activities. HOCIC has been running the Access program since October 2012 and so far has produced 80 graduates.

Brian’s inherent leadership qualities were fully realized during the Access program when he ran for office in the Bulawayo Junior Council, landing the position of Junior Town Clerk, the youngest student to be elected into this position in the history of the Bulawayo Junior Council. As Junior Town Clerk, Brian was central in organizing the biggest youth march against child marriages and ‘Vuzu parties’ in Bulawayo. Vuzu parties are parties where dangerous drugs, alcohol abuse and sex competitions are held. The march resulted in the formation of a social media platform in collaboration with local churches and the police, for reporting on both of these societal scourges.

After completing his O levels with distinctions, Brian was offered a scholarship to pursue his A levels at Maranatha Adventist High School where he led four clubs – Debate, Drama, HIV & AIDS and Youth for Transparency and Integrity. Under the Youth for Transparency and Integrity club, Brian entered won the Transparency International Zimbabwe sponsored national essay contest “Your Voice Against Corruption.’ Brian is also an athlete and won the silver medal for the 400m hurdles at the 2016 National Association of School Heads (NASH) athletics competition.

Given his excellent performance at school and his commitment to the Access program, the U.S. Embassy Harare nominated Brian to participate in PAYLP in 2014, an exchange program to the United States specifically for high school students between the ages of 15-18 years.  During the three week PAYLP exchange trip, Brian won the PAYLP Public Speaking Competition and received recognition and a cash prize for his civic engagement proposal which was centered on raising funds for boys housed at the Percy Ibbotson Juvenile Boys’ Home for Rehabilitation.  The project is still ongoing with money generated from it used for stationery and clothing for the boys. Brian’s success is a testament to his ‘never die’ spirit even in the face of personal loss and tragedy, encouragement from his teachers, and the community at large.

Of course, the serendipitous opportunities he was afforded in the form of Access and PAYLP are experiences he also attributes his success to.- ZimPAS (c) December 13 2016