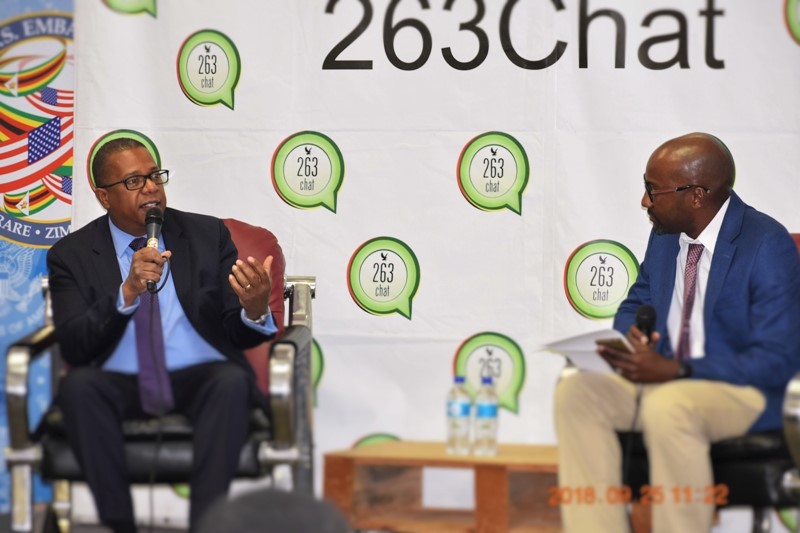 “Africa is a continent that has tremendous potential and a very young population,” said Ambassador Nichols in a townhall to promote the Mandela Washington Fellowship and his country’s relations with Zimbabwe. “The goal of the Young African Leaders Initiative is to bring young African leaders together to help solve the challenges that Africans face and to help forge a strong relationship between Africa and the United States.”

The discussion, moderated by social entrepreneur Nigel Mugamu of @263Chat, enabled the American diplomat to explain the goal of his country’s continued engagement in youth programs.  The U.S. Embassy began the recruitment process for 42 Zimbabwean young leaders for the 2019 Mandela Washington Fellowship this month. The online application process is now open on yali.state.gov.  The application deadline is Wednesday, October 10, 2018 and successful applicants will travel to the United States in June 2019.

The application deadline is Wednesday October 10 2018 and successful applicants will travel to the United States in June 2019.

“This is a very competitive program,” said Ambassador Nichols. “I had the opportunity to meet participants in a similar program in Peru, when President Obama came to Peru; for the Latin American version, the achievements were tremendous.” He said the Africa program is more developed and includes youth leaders in government, business and the public sector.

Ambassador Nichols arrived in Zimbabwe two weeks before the July 30 elections. He pledged his country’s continued support to the people of Zimbabwe towards democracy and prosperity.

“Our focus is on engaging the government and the people of Zimbabwe; and we do that in a number of ways,” he said citing U.S. coordination with Zimbabwe’s health ministry in providing resources through the President’s Emergency Plan for AIDS Relief (PEPFAR) for combating HIV and AIDS.

“But we also work on other diseases like TB, Typhoid fever, malaria and right now we are working to deal with cholera outbreak,” he added. “We have a team of experts from the U.S. Centers for Disease Control and Prevention (CDC); two of them are on the ground and three of them are flying right now to get here in addition to our normal contingent from CDC Zimbabwe to help deal with issues of water, sanitation and immunizations around cholera.”

He lauded the government of Zimbabwe for committing to the ideals of the 2013 Constitution but noted that the key is in the implementation, including alignment of existing laws with the supreme law. “Those reforms announced by government are positive and I want to see them implemented,” said Ambassador Nichols. You can watch part of the discussion here– ZimPAS © September 26, 2018