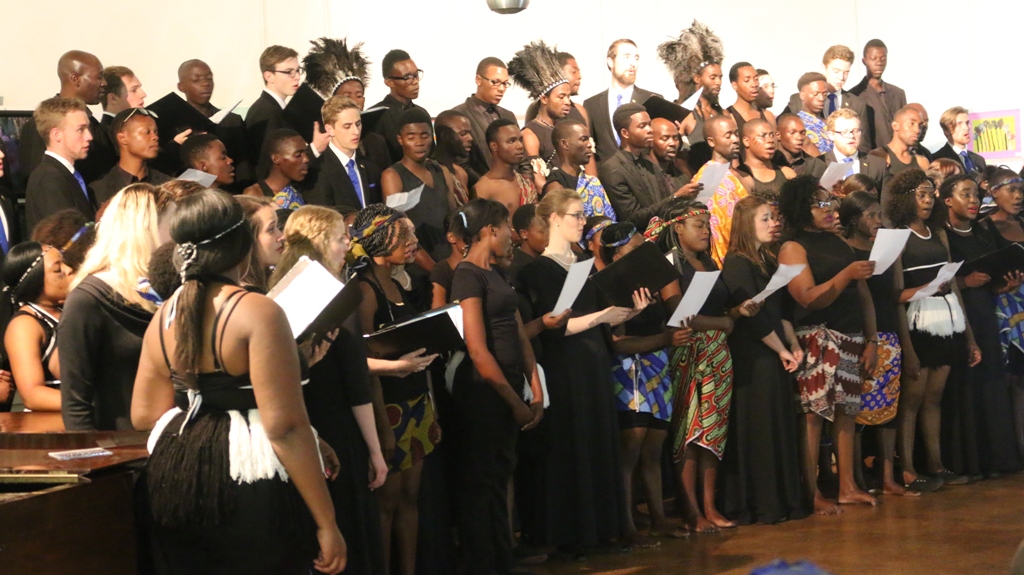 Harare, May 31, 2017: A United States based college musical ensemble, Gonzaga University Chamber Chorus, concluded a two week visit to Zambia and Zimbabwe on Tuesday. The 28 member ensemble comprised of students studying in various academic and professional fields held seminars and workshops with high schools, colleges and prominent choral groups in the two southern African countries.  They concluded the visit with a brilliant joint performance with the seasoned Chitungwiza Harmony Singers at the National Gallery of Zimbabwe on Tuesday evening.

United States Ambassador Harry Thomas attended the concert and described the group as “true ambassadors of the United States.”

“It is always a delight to see young, talented people reach beyond their borders to share their gifts, to experience new places and cultures, to approach the world with an eagerness to learn and to grow from other like-minded people around the world,” added Ambassador Thomas.  “Nothing brings people together like music and the arts,” said the American diplomat who had the crowd in stitches as he recited the lyrics of Soul Jah Love’s recent hit song “Pamamonya ipapo.”

During the concert, the choir performed various songs including songs rooted in the Jesuit and humanist traditions. It covered a wide variety of standard repertoire from the Medieval to Modern historical periods and from diverse cultures. The group also performed alongside Chitungwiza Harmony Singers and participated in local dance routines including Mhande and Jerusalem.

Tour coordinator, Joseph Kinsella, who is also Assistant Academic Vice President at the Center for Global Engagement said the tour provided the group with an opportunity to share musical and cultural experiences whilst also providing a platform to show Zimbabweans (and Zambians) that they are welcome to study in the United States.

Kinsella said the university is always working to accept students from across economic levels.  “It is important to understand that Gonzaga is a private institution and is very intensive. So in order to build our relationships here it is important for us to recruit students who can afford to pay or pay a significant amount, but also to build scholarships…and by recruiting more students we can provide more scholarships for Zimbabwean students to come to Gonzaga and the United States.”

Gonzaga University is a Jesuit private institution of higher education offering studies in 75 fields including 26 master’s degrees and doctorate degrees in leadership and nursing, and a juris doctorate. It enrolls over 7500 students each year including international students.- ZimPAS © May 31, 2017