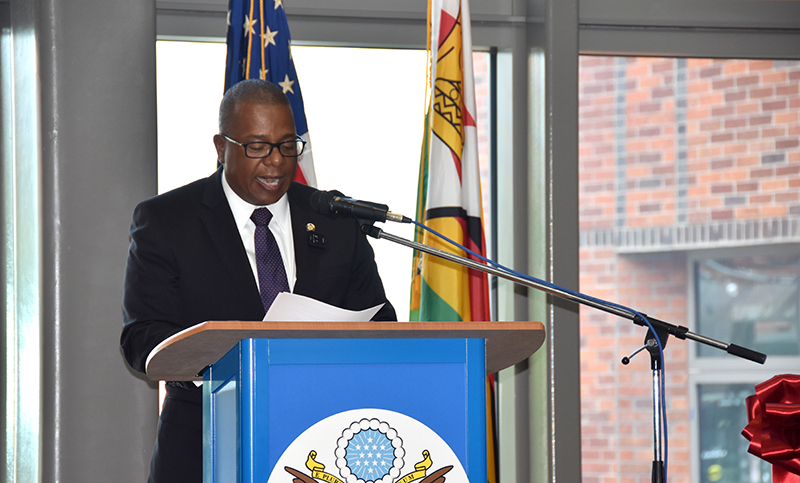 Remarks by Ambassador Brian A. Nichols

Dedication of the New Embassy Campus

Good afternoon and thank you for joining us.

Before we celebrate, let us remember.  Cyclone Idai took over 1,000 lives in Zimbabwe, Malawi and Mozambique.  In Zimbabwe alone, there are more than 270,000 people directly affected.  In addition, tomorrow is Foreign Service Day in the United States.  We use this day to remember the men and women of the U.S. Foreign Service who have given their lives for our country.  I would ask that we bow our heads in a moment of silence in remembrance of all of them.

Thank you.  Great architecture enriches the people and society around it.  The proud people of this land knew this truth a millennia ago when they laid the foundations of Great Zimbabwe, the land of kings, nearly 300 kilometers from here.  And Great Zimbabwe served as the inspiration for this beautiful building.

Our campus evokes Zimbabwe’s geography. The country’s wide open rural plains, known as the “veld” are distinguished by their gently sloping terrain, vast grasslands and tree cover.  The canopy over the main entrance that you passed through moments ago draws its inspiration from the mbira dzavadzimu, or “voice of the ancestors,” a musical instrument that the people of Zimbabwe have played for thousands of years and Hope Masike played so beautifully a few minutes ago.

Look up and to your right.  American artist Yael Kanarek created the hanging art you see above you with the words night and day in 19 languages spoken in Zimbabwe.  Zimbabwean artist Moffat Takadiwa’s iconic tapestries of found items dazzled the New York Armory Show this year, and his work is just around the corner.  Among the other talented artists who gave these buildings life is our Embassy’s own Melissa Finkenbiner.

This New Embassy Campus symbolizes the United States’ ongoing and durable commitment to the people of Zimbabwe.  The project has been years in the making, with an investment of some 292 million dollars.  Our general contractor B.L. Harbert International, represented by Matthew Kolbinski, directly employed over 1,080 Zimbabweans, who worked alongside 550 Americans and third-country nationals.  With B.L. Harbert, we engaged local contractors and bought local supplies whenever feasible.  In addition to structures, we built relationships across a network of service providers.  We look forward to deepening those relationships.

Our spectacular Embassy team, led by Deputy Chief of Mission Jen Savage, Project Director John Kent, and his predecessor Sylvia DiPaolo worked creatively, diligently and tirelessly to make this vision a reality.  Thank you all.

None of this would have been possible without the support and active cooperation of the City of Harare and Government of Zimbabwe.  Honorable Acting Foreign Minister Mathema, Your Worship Mayor Gomba, thank you.

We are dedicating our new embassy at a pivotal time.  I am deeply grateful for the presence of the Honorable Minister and so many other senior Zimbabwean officials.  The United States aspires to strengthen its partnership with Zimbabwe and to expand trade and investment between our countries.  Embracing political and economic reform is the key to achieving these goals.

We are pleased the government is moving toward repealing legislation that fails to align with Zimbabwe’s 2013 constitution.  The right of Zimbabweans to express their views peacefully, to collectively bargain, and to choose their leaders via free and fair elections should never be infringed.

In these challenging times, a broad national dialogue on needed political, social and economic reforms will build confidence in a new Zimbabwe.

Tomorrow, May 3 is World Press Freedom Day, a reminder of the crucial role a free press plays in forging a more democratic society with respect for the rule of law and human rights.  The road to reform is not always easy.  Journalists and civil society leaders deserve our respect for helping to create greater freedom and prosperity.  In that regard, Happy 50th anniversary to the Financial Gazette.

I ask that you also join me in wishing a Happy Birthday, to my wife Geri.

This is a day for optimism, renewed commitment, and celebrating friendship.  The American people look forward to an ever deepening and improving relationship with the people of Zimbabwe.  Tatenda.