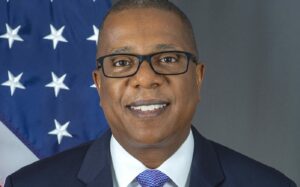 Op-ed by Ambassador Brian A. Nichols first published in the The Standard on January 31, 2021

Harare- February 1, 2021- In the midst of a raging pandemic and the aftermath of violent protests, Americans gathered virtually on January 20 to witness a national tradition: the peaceful transfer of power between presidents.  Along with global citizens around the world, we watched Joseph R. Biden Jr. swear upon his family’s 127-year-old bible to uphold the values and principles of the American Constitution in his new role as the 46th President of the United States of America.

In President Biden’s inaugural address, he spoke to the world, saying “So here’s my message to those beyond our borders: America has been tested and we’ve come out stronger for it.  We will repair our alliances and engage with the world once again.  Not to meet yesterday’s challenges, but today’s and tomorrow’s challenges.  And we’ll lead, not merely by the example of our power, but by the power of our example…. We’ll be a strong and trusted partner for peace, progress and security.”

On his first day in office, President Biden recommitted to protect human rights, celebrated diversity and inclusion, began the process to rejoin the Paris Agreement, and abolished controversial bans on travelers from Muslim and African countries.  He also acknowledged that good governance starts with the top and signed an executive order to restore public trust in the government by directing administration officials to abide by the U.S. code of ethics for government service.

President Biden acknowledged the toll COVID-19 has had on global health, and swiftly notified the UN that the United States intends to remain a member of the World Health Organization (WHO).  To honor the memory of lost loved ones, he urged every American to do their part to curb the pandemic.  The United States will also donate to the COVID-19 vaccine consortium for low and middle income countries (COVAX).

Here in Zimbabwe, this means the U.S. Embassy will continue to work with the Ministry of Health, the WHO, and other local and international partners to flatten the curve.  Since the outbreak began, the United States has committed over  US$20 million to help Zimbabwe combat COVID-19, including training 8,200 healthcare workers to support the country’s health facilities and the donation of 20 U.S. ventilators for use in hospitals across the country.

Efforts to curb the pandemic, however, do not relieve our governments of the basic responsibilities to uphold the rule of law, fight corruption, respect human rights, and conduct safe elections.

The 2020-2021 U.S. elections provided a living lesson on electoral process.  The November 3rd election was the most secure in American history.  Local and state officials organized and carried out elections with the largest voter turnout in U.S. history.  Impartial judges issued timely rulings on electoral challenges.  Our Congress certified the victor.

The assault on our Capitol during that certification reminds us of both the fragility and resilience of democratic governance.

From all the chaos shared on social media, one image of courage under fire stands out: that of Capitol Police officer Eugene Goodman defending the very heart of American democracy.  His quick thinking – and restraint – likely saved countless lives that day and allowed our Congressional leaders to continue their certification of the votes.

In the days that followed, our nation’s law enforcement authorities opened an investigation to identify, arrest, and prosecute those who took part on the attack of the U.S. capitol.  Defendants will benefit from the rights afforded through due process of law.  America’s democratic institutions are not perfect, but the events of the last several weeks demonstrate that democracy will prevail.

January 6, 2021, demonstrated that “while democracy can be periodically delayed, it can never be permanently defeated.” With humility and hope, our nation will do what America always does – continue forward as one people, working each day to fulfill the promise of liberty and justice for all.

So we call on the Zimbabwean government to live up to the democratic ideals enshrined in its 2013 constitution, because we share Zimbabweans’ belief that a democratic government responsive and accountable to the people, provides the best means to achieve lasting peace and prosperity.

We call on the Zimbabwean government to respect freedoms of speech, assembly, and association, because we share Zimbabweans’ belief that respecting and acting on constructive dissent improves policy and strengthens democratic legitimacy.

And we call on the Zimbabwean government to stop arbitrary arrests to silence critics, because we share Zimbabweans’ belief that democracy can only thrive when their sons and daughters can speak truth to power.

Both of America’s major parties participated in this year’s inauguration ceremony for President Biden, marking 244 years of American democracy.  The peaceful transfer of power proves that democratic strength does not come from the ability to quash opposing views, but from the ability to listen, respond, compromise, and begin anew.

As Zimbabwe prepares for 2023 elections, government leaders and ordinary citizens alike must jump-start electoral reform to ensure the level playing field needed for free and fair elections.  In doing so, I encourage all to reflect on the wisdom of National Youth Poet Laureate Amanda Gorman in her inaugural poem “The Hill We Climb”:

Scripture tells us to envision

that everyone shall sit under their own vine and fig tree

And no one shall make them afraid
If we’re to live up to our own time
Then victory won’t lie in the blade
But in all the bridges we’ve made.