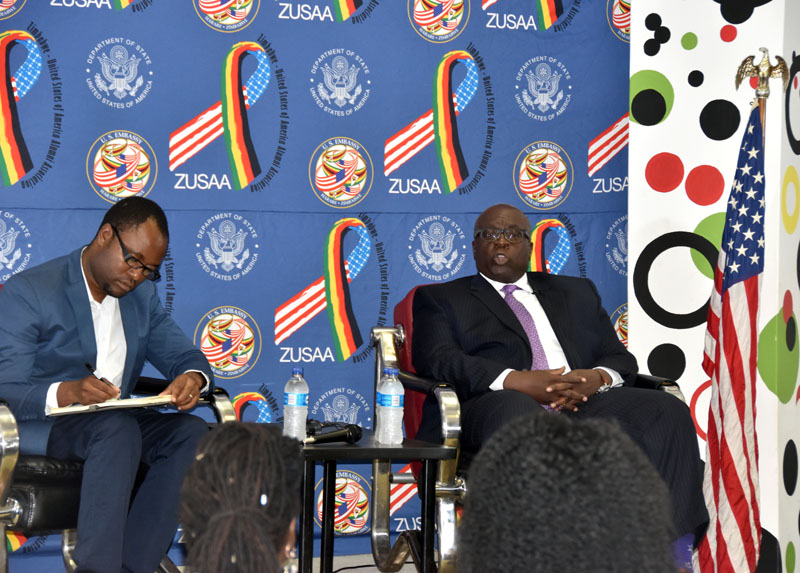 Harare, February 24, 2017: In 1931, American writer and historian James Truslow Adams said the American dream envisaged a life “better and richer and fuller for everyone, with opportunity for each according to ability or achievement regardless of social class or circumstances of birth.” Many continue to cast doubt about the possibility of this reality for African Americans, most of whom were brought to the United States unwillingly as slaves.

“No matter how qualified I was if I was sitting here a hundred years ago there is no way I would have been ambassador or even be a diplomat- I might have been cooking and cleaning somewhere if I was lucky,” said the veteran diplomat.

“There has been tremendous progress and you can’t argue with that,” he said, adding that challenges remain. “Does everyone get to see that? No…when I was teaching in Arizona State University, I met Indian Native Americans- they are clearly equal but humanity has forgotten them.  So yes, there are struggles…but I think the key is family and education – if you are lucky enough to have that you have a chance,” said Ambassador Thomas who joined the Foreign Service in 1984.

Since then he has served as America’s top diplomat to the Philippines and Bangladesh, as well as in the White House as the Director for South Asia at the National Security Council. He enjoyed other assignments in New Delhi, India; Kaduna, Nigeria; and Lima, Peru; and is currently serving his second assignment as a diplomat in Zimbabwe.

“I am here, like you, because of my family- there is always somebody pushing me and others in my family to do well. I did not become a Foreign Service officer without the push of my parents and strict discipline and in those days you know what discipline meant and I suffered a lot,” said the United States diplomat. In response to a question on U.S.- Zimbabwe relations, the Ambassador said that U.S. policies on Zimbabwe will continue, including the many exchange programs that have seen hundreds of Zimbabweans visit the United States.

“I am glad that President (Robert) Mugabe wants to have a good relationship with his counterpart, our 45th president,” he stated. “I want to say that we will maintain our policies here,” he said citing continued U.S. support to health, humanitarian assistance, exchange programs and the construction of the $200 million new Embassy complex.  “America’s commitment to Zimbabwe has remained strong through Presidents including through the President’s Emergency Plan for AIDS Relief (PEPFAR) which was started during President Bush’s administration,” he added.