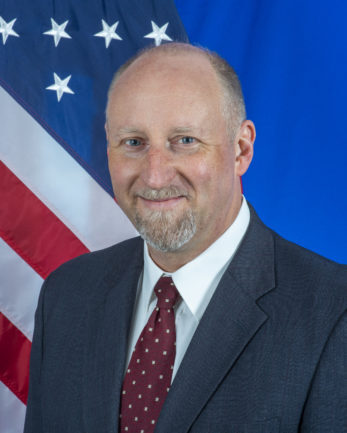 Thomas Hastings arrived as Deputy Chief of Mission at the U.S. Embassy in Harare, Zimbabwe in July 2019 and became Chargé d’Affaires ad interim in August 2021.

He served as a consular officer in Côte d’Ivoire from 2000 to 2002 and as an economic officer in Honduras from 2003 to 2005.  Based in Washington from 2005 to 2010, he covered financial issues for sub-Saharan Africa, worked in the Latin America office at Treasury, and served as a special assistant to the Under Secretary for Economic and Energy Affairs.  He was then Pol-Econ chief in Angola from 2010 to 2013, the senior economic officer on the Mexico desk from 2013 to 2015, and Deputy Director of the Office of Southern African Affairs from 2016 to 2019.

In the 1990s, he taught English at a secondary school in Namibia, taught history at a school in Tanzania, and worked for NGOs in Botswana and South Africa.

He holds a Bachelor’s Degree in History from Haverford College, a Master’s Degree in Public Policy and International Development from Princeton University, and a Master’s Degree in National Security Strategy from the National War College.  He speaks, or has spoken at one time, Oshiwambo, Swahili, French, Spanish and Portuguese.  His wife Justina and son John Philip (age 13) join him in Zimbabwe.