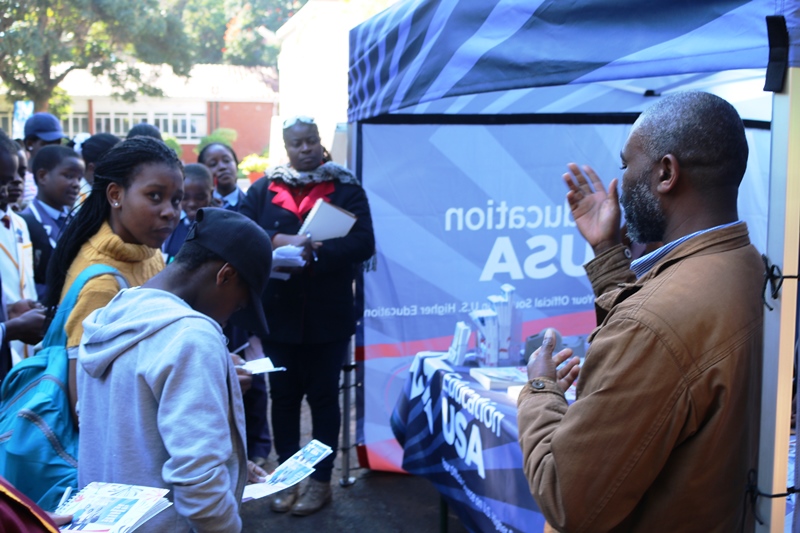 EducationUSA Harare hosted the colleges and universities fair at Prince Edward School on July 22nd to enable high school students and parents to explore study options in the United States. The colleges were represented by current and former students; with three of the 36 colleges represented by Embassy staff.  According to records, just over 300 high school students in Harare and more than 40 parents visited the Fair.

In separate interviews, representatives of colleges showcasing study opportunities available at their institutions financial aid and scholarship information dominated the inquiries they received from students and parents.

“Most students are asking about financial aid and scholarships because they want to know if they will be able to afford going to the university,” said Ruvimbo Dzvurumi (pictured), representing Agnes Scott College, an all-women’s private liberal arts college in Atlanta, Georgia.   Ruvimbo is one of two Zimbabweans at the college but said despite the small African population at the school, campus life was not as lonely.  However, she felt, that aspect of her university did not concern most students that visited her stand.  “I have seen that actually most students are interested in going out of Zimbabwe, out of their comfort zone,” she said.

The college fair, however, demonstrated the education possibilities in the U.S.  Currently there are 1,295 Zimbabwean Students, at U.S. higher education institutions. The Fair enabled students to learn first-hand information about campus life, study options and available sports opportunities in most colleges.

“My college offers a student to teacher ratio of one to 12 students, it’s kind of unusual I think so students were impressed and pretty interested in that,” said Mary Elien Tsikos- Velez representing the College of Mary and William.

Panashe Mayangamutse, representing Michigan State University, shared some aspects of her college that made the United States look like just another part of Zimbabwe. “We have about 13 Zimbabwean students on campus that you get to meet here and there, that way you don’t feel as much home sick because you have fellow Zimbabweans and you can cook sadza and speak Shona too,” she said. She added that her university was “big and amazing” being ranked in the top 100 of the top universities in the United States.

Nimrod Zimuto, a parent, said he had visited the Fair to look for study options for his high school children that could not make it to Harare. “There is a lot of options, and interesting colleges available,” he said.

EducationUSA Country Coordinator, Tafadzwa Muzhandu said the Fair was part of efforts by her office to encourage students to choose the best universities for their fields. “There are over 4500 accredited universities in the United States and Zimbabwean students have to navigate that. We help them navigate that at our centers in Harare, Gweru, Mutare and Bulawayo,” she said.

Most Zimbabwean students in the U.S. are either on full or partial scholarships.

However, locally, said Muzhandu,  the EducationUSA Advising Center administers Opportunity Funds to assist disadvantaged but academically gifted students negotiate the application process to top universities in the United States. A similar fair was held in Mutare the previous weekend and another Fair will be held next Saturday (July 29th) at Eveline High School in Bulawayo from 10 am to 2 pm.