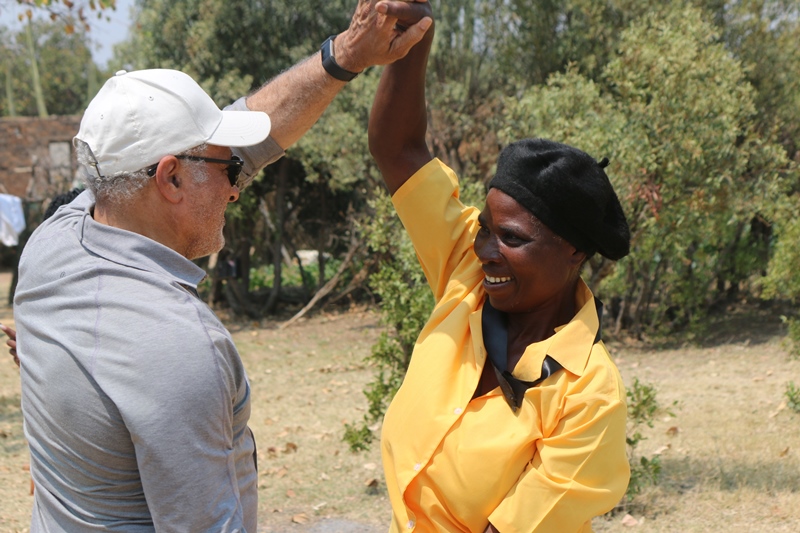 Tsholotsho, September 28 2017- Former United States congressman, Michael Espy, says governments can do more to enhance progress towards food self-sufficiency, including allowing the international community to continue to play a role. According to the former U.S. Secretary for Agriculture, now a member of the governing board of the international Cultivating New Frontiers in Agriculture (CNFA), argues that Zimbabwean communities he met in his week long visit to the country exhibit the right commitment and attitude to speed up the process of community development.

“I am taking back with me a heart full of joy and a brain full of seeing people here who are willing to work,” said Espy. The former U.S. congressman and CNFA board of governors were joined in Tsholotsho by Ambassador Harry Thomas Jr. and USAID mission director Stephanie Funk after visiting other USAID funded food assistance projects in Matabeleland South. In Tsholotsho they visited a food distribution site at Nkunzi Primary Health Centre, a rehabilitated dip tank, a village savings and lending group, a conservation agriculture plot, and a community health club.

The CNFA projects in Zimbabwe are implemented under the umbrella term “Amalima”- a Ndebele term which means working together. The projects use community-led approaches to increase agricultural productivity through conservation agriculture and livestock management trainings, land rehabilitation, water management, improved drought mitigation and adaptation. An array of activities implemented by community groups work to enhance nutrition care practices and health-seeking behaviors by providing a combination of capacity building, training and mentoring, supplementary feeding rations, and community-based messaging.

“I have seen large projects where they are putting rocks to secure a dam that they did without the use of a tractor or heavy equipment- they did it themselves,” said Espy. “They know what they are planning and they know what lacked, and they are willing to be an integral part of their self-sufficiency and that is something that you don’t see in some countries around the world.”

CNFA is a non-profit international development organization with a head office in Washington, D.C. and a European branch, CNFA Europe, based in Brussels, Belgium. The organization specializes in designing and implementing sustainable, market-led agricultural, agribusiness and livestock initiatives. It works with businesses, farmers’ groups, governments and communities to help communities create local solutions to meet demand for food as well as creating positive changes in the lives of smallholder farmers and rural entrepreneurs.

In the CNFA board, Espy brings a wealth of government and private sector experience. He was the first African American and first person from the Deep South to be elected into Congress from the State of Mississippi since the Reconstruction-era. While in Congress, he served his district as a member of the Budget and Agriculture Committees.  He believes self-reliance and supporting the food development and the farms of its own country as the objective of every country.

But until that happens, he says, you have to go out to the international community to come and help. “So the government should do what it can do and secure revenue from its own resources to provide fertilizer and better seeds and extension services like training and support for the farmers to get some knowledge to create the yields that will grow.”

“The people here are willing,” he added  “They have a cooperative attitude, and they need a little bit more support and information from the international community but yes their own government to provide resources and information and technology… we also need more technology, more equipment, more implements and tools and even tractors and combines that you can produce food on a greater basis…Even if it is not owned by the community, it can be rented and loaned for a period of time and kept in a communal storage and used when necessary and rented, may be by the savings and loans.”

So far, CNFA’s work in Zimbabwe has worked with communities to construct or rehabilitate 78 assets aimed at building drought resilience—including dams, irrigation schemes, and dip tanks with support from the United States International Development Agency (USAID). The support has resulted in the formation of 670 village savings and lending groups, which now hold a combined total savings of more than $639,000. Through the Amalima program, 316 community health clubs have been established and these have trained more than 6,000 people to improve household sanitation and hygiene. To date, CHC members have constructed 205 latrines, more than 2,000 tippy taps, and 435 refuse pits.