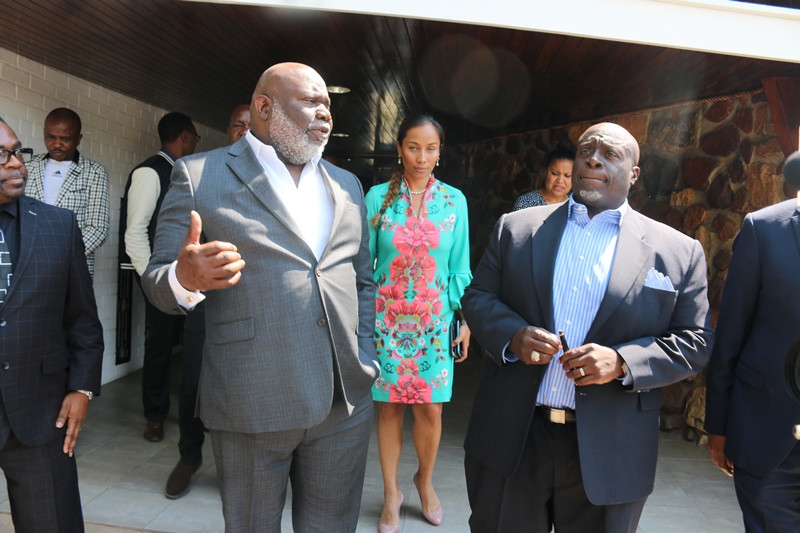 “It’s been a great experience,” said Jakes, the Bishop of The Potter’s House, a non-denominational megachurch in Dallas, Texas with more than 30,000 members. “I didn’t come here with a lot of preconceived expectations, I came in as a blank sheet of paper to meet the people, experience the food and the cuisine and just learn through the experience.”

The breakfast meeting at the American diplomat’s residence was attended by youthful clerics who shared insights about the role of the church in Zimbabwe.

Bishop Jakes said his visit to Zimbabwe was to celebrate Zimpraise Choir’s 10th anniversary. ZimPraise Choir is a popular contemporary gospel musical group based in Harare.

In addition to several engagements with the church, Bishop Jakes said he was honored to meet President Robert Mugabe.

“I was really privileged to have an opportunity to sit with the President and we spent a couple of hours together, he was generous with his time,” he told ZimPAS. “It was very interesting to listen to his perspectives on things that I have had the other perspective of.   And to get his perspective included in the process of how I think about things, and that is something that I will mull over for quite some time.”

The influential bishop had to contend with questions about political and other developments from journalists.  He is not alarmed by the many challenges Zimbabwe is facing, he said.  “You have to take into consideration that it is a very young country and I think sometimes in this world we live in today you can see other countries and compare yourself with them, sometimes it’s difficult to make a fair comparison because you are a fairly young country,” said Bishop Jakes.

“If you rolled our country back to maybe 30 years old, we would not be the America that we are today. And it takes a lot of time to bring about the change and the stability that really makes a country become the populace of people who are really pleased and accommodated in a way that is really appropriate to them.”

Whilst in many countries, the African American church is known for its prominent role in the civil rights movement; Bishop Jakes said the church was currently working to alleviate the suffering caused by natural disasters as well as empowering minority groups.

“Right now we are doing hurricane relief,” said T.D. Jakes. “On the other frontiers we at the Potters House have taken on the issue of working with inmates to equip and empower them to become productive in their communities.”

He said 10,000 inmates had been taken through the program and the church was now helping them get jobs and matriculate them back into society.

T.D. Jakes founded The Potter’s House in 1996. The ministry has grown to one of the largest and most well-known megachurches in the United States, boasting a 17,000-person attendance each week.  In addition to The Potter’s House, his church services and evangelical messages are broadcast around the world on other networks such as the Trinity Broadcasting Network, Black Entertainment Television, the Daystar Television Network, The Word Network and The Miracle Channel in Canada.- ZimPAS © November 11 2017.