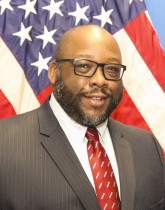 Mr. Art Brown is a Senior Foreign Service Officer (SFS) assigned to Harare, Zimbabwe.  He is currently on official detail to the Department of State as Deputy Chief of Mission as of August 27, 2021. Mr. Brown served as (USAID) Mission Director at Embassy Harare from August 2020 to August 2021, and he will continue to serve in that role after a new Chief of Mission is confirmed. He served prior as USAID Director to the Dominican Republic from 2016-2020, twenty months of which he was on official detail to the Department of State as DCM (Deputy Chief of Mission) for the U.S. Embassy in Santo Domingo. Mr. Brown was USAID Director to Managua, Nicaragua from 2012-2015.

Additionally, Mr. Brown has served as the SFS Deputy Director in Kabul, Afghanistan from 2015-2016, and Deputy Director in Kinshasa, Democratic Republic of the Congo from 2009-2011. He is in his 30th year of federal service for the USG. As a USAID Officer, Mr. Brown has worked on bilateral development assistance programs for over two decades. He has prior experience in Botswana, Guinea, Nigeria, and covered regional activities in Sierra Leone, Haiti, Jamaica, Barbados, and Namibia.

Mr. Brown has volunteered in a variety of civic and charitable organizations-Women Infants and Children (WIC) welfare program, and the Washington Free Clinic in Washington, DC. Mr. Brown is married to a Certified Family Nurse Practitioner who is a Returned Peace Corps Volunteer from Togo, West Africa where they met and they have a son and daughter together. Mr. Brown served as a Rural Community Development Extension Agent in the Republic of Bénin, West Africa, Ministry of Labor and Social Affairs where he was a Peace Corps Volunteer for over three years.