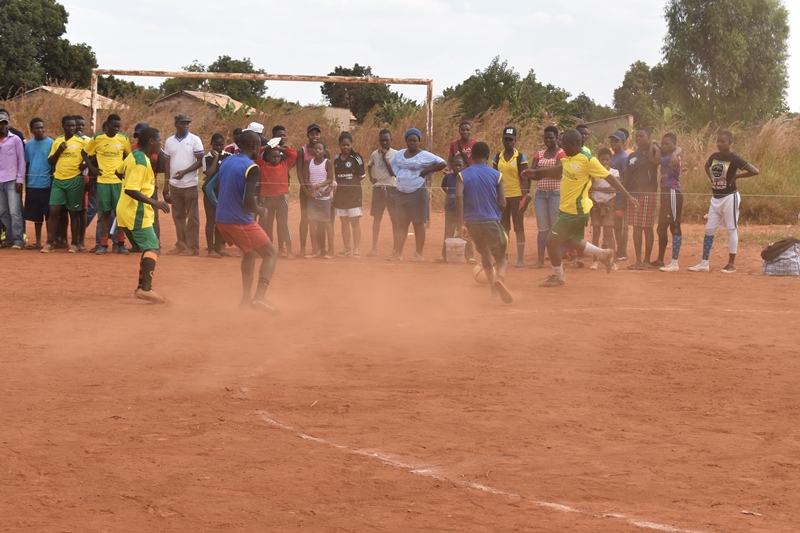 “Statistics received from the International Training and Education Center for Health (ITEC) show that 126 individuals voluntarily tested for HIV with three of the seven that tested positive being initiated for anti-retroviral therapy,” said Gay Nyakwende, PEPFAR Communications Specialist. “Our partner, I-TEC, collected the contact details of the four individuals who deferred ART and a follow up will be conducted with the aim of bringing them back to care.”

On June 2, PEPFAR collaborated with Young Achievement Sports for Development (YASD) at the first preparatory tournament for the Homeless World Cup in Hatfcliffe’s high-density suburb. The event enabled YASD to recruit Zimbabwe’s representatives to the 16th edition of the Homeless World Cup scheduled for Mexico City from November 13-18.

At the event, participants who included players from 17 teams of eight participants contesting had access to health services and health information from PEPFAR partners. These included The Union, providing information about Tuberculosis (TB), HIV, asthma, tobacco and lung disease; and Mavambo Orphan Care, which works in Mashonaland East to initiate empowerment programs for vulnerable people such as orphans and young mothers. Other organizations present were FHI360 – which works to increase the availability of care and treatment services for people living with HIV, among other services and the Elizabeth Glaser Pediatric AIDS Foundation (EGPAF) working mostly on pediatric HIV care and treatment programs. Another PEPFAR partner, Population Services International (PSI) promoted HIV prevention services such as voluntary medical male circumcision to the significant number of adolescent and young boys attended the event.   Similarly, FACT explained their multiple interventions that transform the lives of vulnerable communities in a sustainable way.

Senior U.S. Embassy officials, local Member of Parliament Mudambo Tongesai and FifPro representative Edward Sadomba, among other dignitaries, attended the Homeless World Cup selection tournament. Officiating at the event, Jennifer Savage, Charge d’ Affaires at the U.S. Embassy reminded the participants that participating in sports mirrored the strength, endurance and stamina the U.S. support to the health sector has demonstrated.

“Among our top goals as the U.S. Embassy in Harare is to foster a healthy Zimbabwe,” said Savage.  “Sports and physical activity are integral parts of a healthy lifestyle, and we thank YASD for organizing these exciting games.”

She said 2018 marks the 15th anniversary of PEPFAR- announced on January 28, 2003 and signed into law on May 27, 2003.  “When PEPFAR began, an HIV diagnosis was considered a death sentence in many countries around the world,” said Savage. “Today, we are closer than ever to controlling and ultimately ending AIDS. In Zimbabwe, new HIV infections are averted with every 8 voluntary medical male circumcisions performed and 306,000 males will have participated by the end of the year.  2.5 million individuals received testing and counselling services for HIV and received their test results during the past 12 months with 880,000 adults and children receiving antiretroviral therapy (ART) through support from PEPFAR.”

PEPFAR has availed $150 million dollars towards the national response to HIV and AIDS.  This amount is a huge commitment towards the attainment of the 95-95-95 targets for ending AIDS by 2030.

“Sports can uplift your life like it did mine. My father passed on when I was two years old and I grew up with limited resources,” said Sadomba. “But because of discipline I have managed to play for the national team, Sudan, United Arab Emirates and to play for Dynamos. I want to encourage you stay away from drugs because these limit your potential,” he added.

YASD officials said they were finalizing the list of players for the Homeless World Cup. 17 teams participated in Hatcliffe and more are expected to participate from Epworth and Mbare.

The first Homeless World Cup took place in Graz in 2003. The Austrian city welcomed 144 players form 18 countries. Since then the tournament has traveled to 15 different cities across the world and has grown to accommodate over 64 teams and more than 500 players. ZimPAS © June 5, 2018