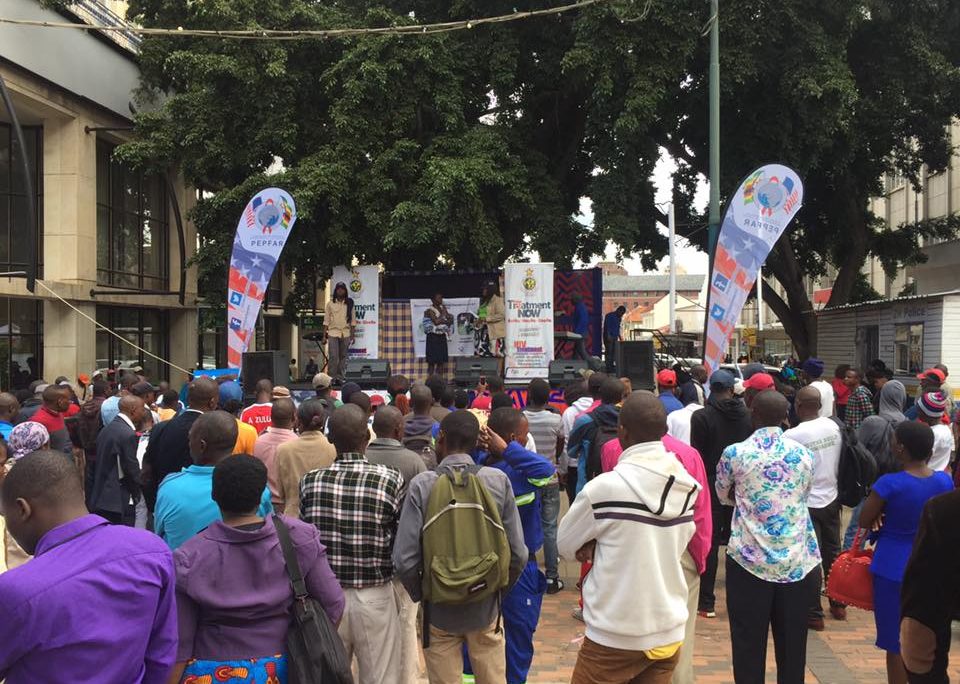 Harare, May 4, 2017– The OK- PEPFAR First Street Stage in central Harare was a hive of activity with scores of individuals queuing to get tested for HIV as well as receive health information on Wednesday. The platform, operating under the theme “Start Free, Stay Free, AIDS Free,” is part of the ongoing Harare International Festival of the Arts (HIFA 2017) and provides a unique opportunity for health services providers to meet members of the public while musicians from the HIFA line-up and other entertainers provide free performances.

The entertainment has been flowing and a lot of people that meet our partners have gone on to get tested,” said Gay Nyakwende, PEPFAR Communications Coordinator. “We learnt from the experience of 2014 and our partner, Population Services International- Zimbabwe, has provided more testing sites.” Six tents were visible at the site, with queues of individuals waiting to get tested for free at the junction of First Street and George Silundika Avenue.

Organizations participating at the PEPFAR First Street Stage were generally upbeat about their participation at the event including the public response to their presence. Tinashe Marowa, a communications and advocacy graduate trainee manning the Elizabeth Glazer Pediatric Foundation (EGPAF) stand said the public has been responding well to his organization’s messages. ”People are keen to learn, I see they are very interested in acquiring information, some people don’t know about prevention of mother to child transmission especially the fact that it possible for an HIV positive mother to give birth to a child who is HIV negative,” he said.

Noni Catherine Mudzinga, a female krumper, afropop and hip hop dancer with Jibilika Dance Trust said she and her staff were enjoying communicating the HIV and AIDS message using art. She said they were using the platform to recruit members for their dance classes that include providing wellness information to young people.  “We have managed to recruit a big following of young people using break dancing,” said the Strictly Girls choreographer. Her organization, partnering with PEPFAR to implement the ‘Step Up to HIV’ program, brought five female dancers to entertain the crowd throughout the day.

Tendai Jubekanda is coordinating the national HealthCare Associated Tuberculosis Infection Prevention Project – Zimbabwe (HATIPP-Zim) implemented by the Biomedical Research and Training Institute with funding from the U.S. Centers for Disease Control and Prevention.  Tendai said it was regrettable that they did not have TB screening equipment on site. “We are promoting TB infection control among health care workers and communities…are telling people that if they test positive for tuberculosis they should also test for HIV, and vice versa because the two are related.” She said they were encouraging members of the public to use simple methods of preventing the spread of TB such as opening windows in public transport and church buildings.

To reinforce messages about TB prevention, HIFA 2017 will be screening the feature film, Lucky Specials on Thursday May 4th  from 12.30 pm to 2.30 pm and Sunday May 7th at 3.15 pm at Studio 4. The film was produced with support from the United States Agency for International Development (USAID) and PEPFAR in partnership with the Discovery Learning Alliance, Quizzical Pictures, Wellcome Trust, Howard Hughes Medical Institute (HHMI), HHMI Tangled Bank Studios, and Management Sciences for Health (MSH).  The film premiered in Harare on March 9.

The First Street stage collaboration with PEPFAR represents one of the platforms where the public can get free info- tainment during HIFA which opened on Tuesday and runs until Sunday May 7th.  PEPFAR  (the U.S. President’s Emergency Plan for AIDS Relief) is an initiative started in 2004 by the United States government and has committed $135 million in 2017 to support the Government of Zimbabwe’s National response to HIV and AIDS by providing high-impact prevention, care, and treatment interventions.- ZimPAS © May 4, 2017