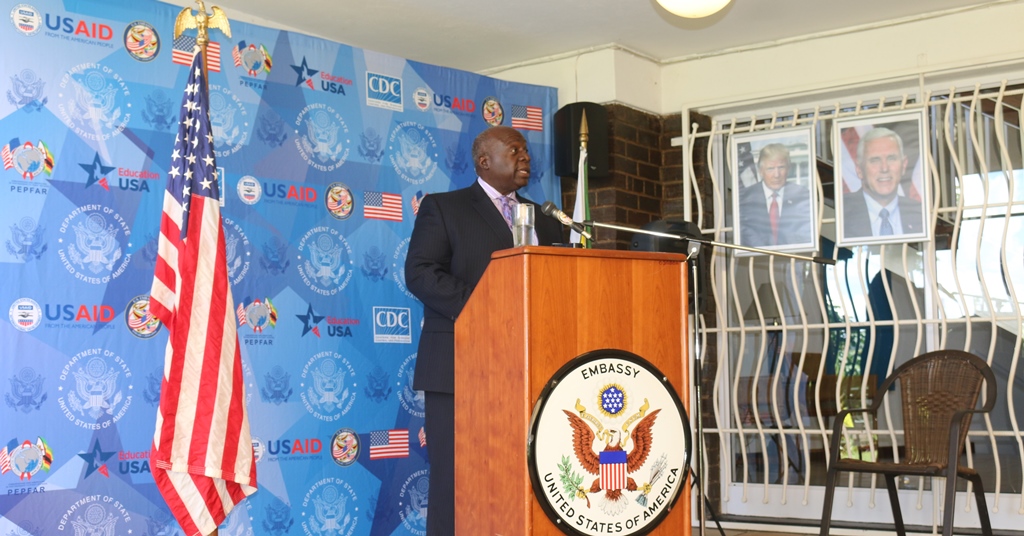 Good afternoon ladies and gentlemen, distinguished guests, members of the Diplomatic Corps and dear friends.  Thank you so much for joining us here today.

Please welcome our guest of honor Thomas Hastings, who is the State Department’s Deputy Director for Southern Africa.

We are also announcing that the US will provide $150 million dollars via PEPFAR to defeat HIV-AIDS in the coming year.  Immediately and separately, we are donating an additional $4 million of water, sanitization and hygiene and nutritional support for people living with HIV in drought-affected areas of Zimbabwe, including urban centers.  This brings the total USG support to assist the food insecure to $131 million; the largest contribution of any donor in Zimbabwe.

With those words, President Elect Trump became President Trump, the 45th President of the United States.

That one moment is the very hallmark of our democracy: the peaceful transfer of power from one president to another.  No matter how contentious the election, no matter how vast the apparent divide, the American people continue the relentless cycle of democracy and of progress.  My father saw 13 presidents sworn into office and my 92 year old mother has seen 15.  I have witnessed ten.

The American people have at several points in our history been divided in their opinions of our candidates, but my parents knew and I know that the office of the president will remain strong through transition. My parents have faith because of the progress they experienced. When my dad came home after fighting for our country in WW II, he could not vote.  Neither could mom. I myself had to use segregated movie theaters, water fountains and even the doctor’s offices.. My children have never had to experience these challenges.  Many of you suffered similar humiliations under Rhodesian apartheid but your children now experience more rights than that time.  As Dr. King said “the arc of the moral universe is long but it bends towards justice” and that is true in both our nations.

Many of us are turning our attention to the 2018 elections here..  Zimbabwe’s     people must determine its future .  Our objective is the same as yours;  to ensure that elections are fair, transparent and free of any violence or intimidation, and that elections are followed – regardless of outcome – by a peaceful transition of power.  All people, institutions and government agencies have a role to play in ensuring a positive election process and outcome, and the United States looks forward to working  in collaboration with our local and international partners, and to promote a process that is free and transparent.  Violence and intimidation cannot be tolerated, nor can attempts to hinder the ability of Zimbabwean citizens, including those in the diaspora, to cast their votes.  We know efforts to undermine the credibility of the electoral process are well underway and we must not allow this to continue.  The pre-election scenario of violence, intimidation and vote buying we saw last month in Bikita-West is unacceptable and out of step with the global trend towards free and fair elections.   Zimbabwe should not be left behind as Africa and the rest of the world are making progress in terms of representative government.

The United States stands ready to partner with those entities committed to making the 2018 election one that all Zimbabweans can be proud of. My mother visited Zimbabwe in 1991.   Having witnessed so many peaceful transitions in the United States, I know that she joins me in wishing you the same in Zimbabwe.  Together we can build a better future for all Zimbabweans, one that sees your country return to being the bread-basket of the region; where all the bright and innovative minds (and there are so many here) see their ideas grow into real products; where there are ample jobs to sustain those minds and make positive change in Zimbabwe not just a reality, but a certainty.

Before I conclude I want to let you know that we cannot ignore current events.  Many of you are wondering about the president’s Executive Order.  Some are saying how can you preach to us or claim the moral high ground?  We are seeking clarifications from Washington.  We remain the country where recent immigrants created eBay, Google, Instagram, Tesla, Uber and Venmo.  Incidentally Venmo’s co-founder Iqram Magdon-Ismail is a Zimbabwean-American.  We believe that in the end we will continue to benefit from immigrants.

I am married to a green card holder; two of my three children are green card holders. They love America and they appreciate as I do the challenges of immigration that have made our country great.  Zimbabwe too is a nation of immigrants and indigenous people. Zimbabweans hail from Europe, Asia and other parts of Africa, and what I so admire is your collective efforts to work for a positive future.

I look forward to working with each of you as we strive to achieve those goals.

Tatenda, Siyabonga and Thank you.