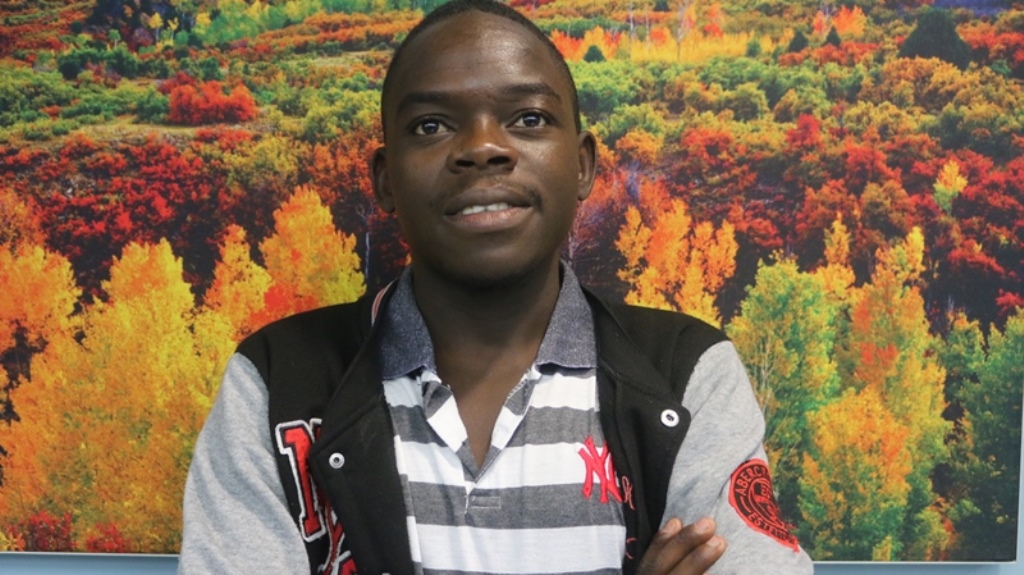 Harare, April 13, 2017– Shingirai Guchu (21) is headed to Lebanon Valley College in the United States after securing the Almond Tree Scholarship. News of the result of the highly competitive award was announced to him through the EducationUSA Advising Center last Thursday.

“That was the most shocking and surprising moment of my entire life so far,” says Shingirai (in picture) who grew up in rural Matsika in Manicaland Province. “I needed a week to sleep on it, to believe and accept

He will be one of more than a dozen international students at the college located 20 minutes from Hershey, Pennsylvania, home of the famous Hershey chocolate company. The scholarship (fully valued at $50,000 per year) will cover tuition, housing, meals, taxes, and includes an annual flexible fund of $6,500 which can be applied to travel expenses, computer, text books, living supplies and visa costs.

“Growing up, I had feelings of being trapped in a stagnant environment, yet ironically, adversity may have been the greatest motivation I needed,” says Shingirai. In his rural hood, very few complete high school education and college education is an idealistic concept, he says. “And college in America is beyond anyone’s wildest dreams. I will be the first one in my family to travel abroad,” says the last born in a family of four.

His family survived from subsistence agriculture, selling crops for cash to fund education.  “This was our kind of life and it saw my childhood marked with so many hardships including going to school bare-footed. My three siblings did not manage to get enough education due to financial challenges, and when my father passed on, my mother struggled to take care of us,” says Shingirai.

Despite the hardships associated with learning in a rural school including travelling long distances every morning the soft spoken Shingirai attained a distinction in electronic data processing at O level, complementing the 10 As and a B in other subjects. Teachers at Nyakuipa Secondary School recommended him for the Solon Foundation bursary at St. Faith Mission High School in Rusape.

Even then, says Shingirai, life was a constant struggle. “I could not afford the basic things that came with boarding life such as soap, food, tuck, and other fancy things my friends had,” he says. And it was in one of the visits by the EducationUSA Advising Center staff that he got wind of possibilities of studying in the U.S.  Shingirai located the EducationUSA Advising Center to attend a public session for students aspiring to study in the U.S.

Shingirai was admitted into the Opportunity Fund program, run by the United States Embassy to assist economically disadvantaged students with costs associated with the application process to American colleges. Each year, the Embassy’s Education Advising Center accepts 35- 45 students from across the country for such support from nearly 1000 applications.

“The Opportunity Fund program is a unique and distinctive initiative that assists talented students overcome great odds to pursue their dreams of obtaining a U.S. education,” says Tafadzwa Muzhandu, EducationUSA Country Coordinator.  Zimbabwe has many talented students, who qualify for admissions to top U.S universities. However, those from low income households often fail to take advantage of opportunities due to lack of information and financial resources.”

In 2016, Opportunity Funds for Zimbabwe enabled 22 students to begin studies in the United States. This year, Shingirai will join several other Zimbabwean students who are receiving offers from U.S. colleges and universities for the 2017-18 academic year. ZimPAS © April 13, 2017