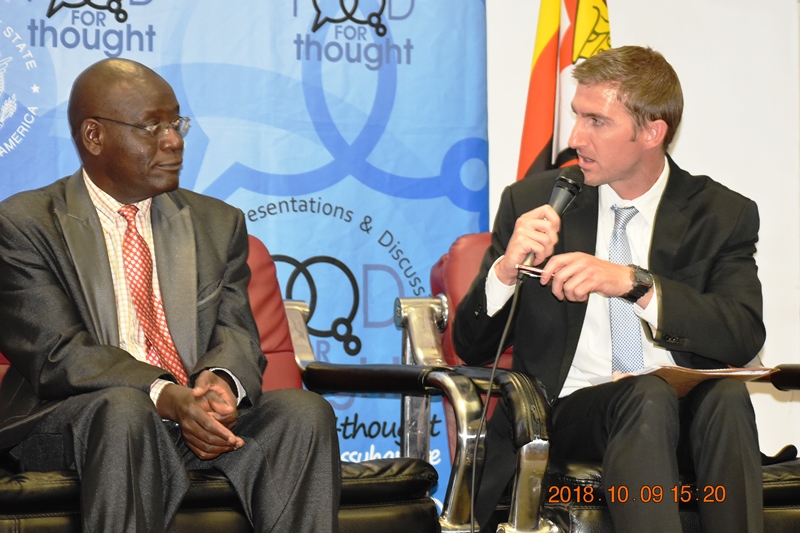 Panel discussion on trafficking in persons

Harare, October 10, 2018- United States Ambassador Brian Nichols has lauded efforts by the Zimbabwean authorities to curb trafficking in persons and called for stronger partnerships between civil society organizations, law enforcement and the judiciary.

One crucial thing that jumps out at me as central to the fight against trafficking is coordination between civil society organizations, law enforcement, prosecutors and the judiciary to form a united front against trafficking in persons,” said the U.S. Ambassador. “That is essential and many countries are moving forward in that area and I am happy to say that Zimbabwe is one of them and hopefully this discussion will strengthen those efforts.”

Ambassador Nichols, who in 2011 served as Principal Deputy Assistant Secretary of State for International Narcotics and Law Enforcement Affairs (INL), officiated at a Food for Thought discussion session to mark commemorations for Zimbabwe’s national observance of World Day Against Trafficking in Persons, held in Beitbridge, Matabeleland South on September 6th.

“I was very pleased by the Vice President’s remarks over the weekend talking about the importance of combating trafficking in persons and I think that the inter-agency strategy that the government of Zimbabwe has been working on is a very positive sign for the future in the fight against trafficking in persons,” said Ambassador Nichols. He said the United States had in the past year provided $750,000 in assistance for anti-trafficking programs covering victim services, awareness, referrals, aligning legislation, and building mutual capacity among other things. “Those are efforts that we are very proud of and look forward to working with all of you to continue and to find ways in which we can even be stronger partners,” he said.

During the discussion, moderated by Ben Wiselogle of the United States Embassy, representatives from the United Nations International Organization for Migration (IOM) and the Zimbabwe Community Development Association Trust (ZCDT) shared information about trafficking in persons in Zimbabwe and internationally.

Camilius Machingura of ZCDT said his organization’s work had led them to look inward, noting that a lot of trafficking in persons happened within Zimbabwe’s borders.

“As we conducted our outreach in the districts, we saw that even for some police personnel and district administrators were coming across the Trafficking in Persons Act for the first time,” said Machingura.

Daniel Sam of IOM called for a multi-dimensional approach to the issue of trafficking in persons. He encouraged participants to look at the subject of human trafficking as “an economic issue, a social issue, a human rights issue, it’s a migration issue as well, and it is a developmental issue.” The IOM is working with the government of Zimbabwe and civil society organizations to build capacity to respond to trafficking in persons, he said.