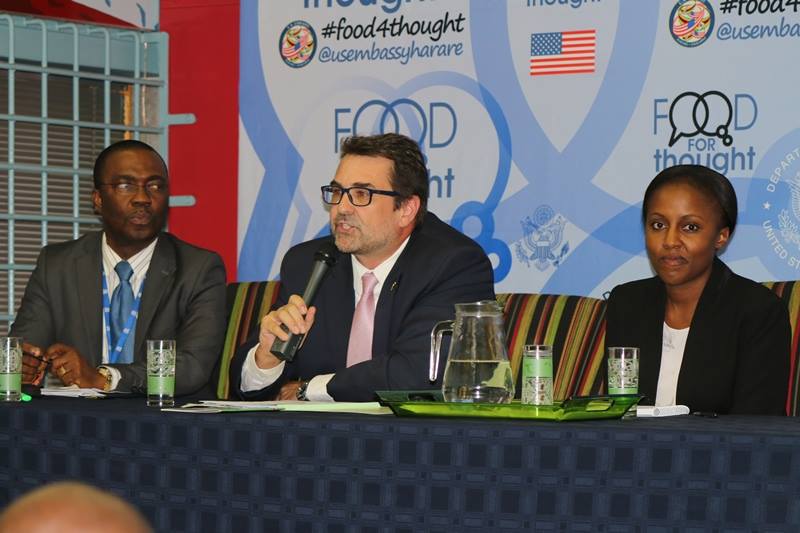 Harare, March 16th, 2017: A senior United States Embassy official has called on the public to boycott products from companies involved in human trafficking, in addition to other measures to help stamp out the scourge that has plagued humanity.

“We as individuals can make a difference by being aware of our own habits, by understanding the background and practices of the companies we use when we purchase our clothing, our food…” said Jenifer Savage, Charge d’ Affaires at the United States Embassy in Harare. “When profits stop, so will the practice of trafficking in persons,” she added.

Savage, a career foreign service officer, was giving the keynote address during a Food for Thought discussion on trafficking in persons at her Embassy’s Eastgate auditorium. The discussion included presentations from the United Nations Office of Migration (IOM) and United Nations Office on Drugs and Crime (UNODC) and triggered a lively debate on related subjects including cultural practices, legislation and enforcement.

“Human trafficking is a $150 billion illicit industry and it touches millions of lives across, not just the United States, not just Zimbabwe but across every country in the world,” she said. “We must treat this not as a problem to be managed but as a crime that has to be stopped.”

Savage, whose career as a diplomat saw her serve in Mexico and Vietnam, narrated two sad cases involving a veterinary student in Mexico and a budding female musician in Vietnam. Both were lured to the United States with a promise for lucrative incentives but later found out there were lured to exploitative situations with little to no pay, totally dependent on nefarious individuals and with no hope of getting out of their situations.

Broadly defined, human trafficking is the acquisition of people by improper means such as force, fraud or deception, with the aim of exploiting them. “It is a form of modern day slavery and constitutes a human rights violation against the individual and the State,” said Daniel Sam of IOM. He told the audience that there is exploitation in all stages of the process- from recruitment to destination. “It is an abusive process; that is why we need to counter it.” According to IOM, there were about 250 million international migrants globally last year while 760 million people migrated internally. At any one point in time there are 1 billion individuals on the move.

Savage said the United States was exploring ways of working with Zimbabwean authorities to eliminate trafficking in persons referencing a very productive meeting between Ambassador Harry Thomas and Home Affairs Minister Ignatius Chombo.  “Our countries agreed to work together to combat trafficking in persons in Zimbabwe,” she said. “This is an important development in our diplomatic relationship and one we hope will lead to greater mutual trust and dialogue on other topics.”

Savage said the United States is also working with other international partners at every level to attack the root causes of trafficking; to alert potential victims to lurking dangers, to take perpetrators off the streets and to empower the survivors as they rebuild their lives.

Samantha Munodawafa, a crime prevention and criminal justice officer at the United Nations Office of Drugs and Crime, said more cases of trafficking in persons crimes were being prosecuted as 13 out of 15 countries in the Southern African Development Community (SADC) region had legislation on the crime. She said the region had to contend with unique cases such as trafficking in body parts for albinos, girls being trafficked as a result of cultural beliefs, child labor and marriages, and even cases involving churches.

According to the U.S. Department of State Trafficking in Persons report, 55 per cent of trafficked people are women or girls, and 26 per cent of trafficked people are children. The report notes that “Zimbabwe is a source, transit, and a destination country for men, women, and children subjected to sex trafficking and forced labor. Women and girls from Zimbabwean towns bordering South Africa, Mozambique, and Zambia are subjected to forced labor, including domestic servitude, and sex trafficking in brothels catering to long-distance truck drivers on both sides of the borders.”

The report also notes that “there are continuous reports of Zimbabwean women lured to China and the Middle East for work where they are vulnerable to trafficking.”- ZimPAS © March 16th 2017