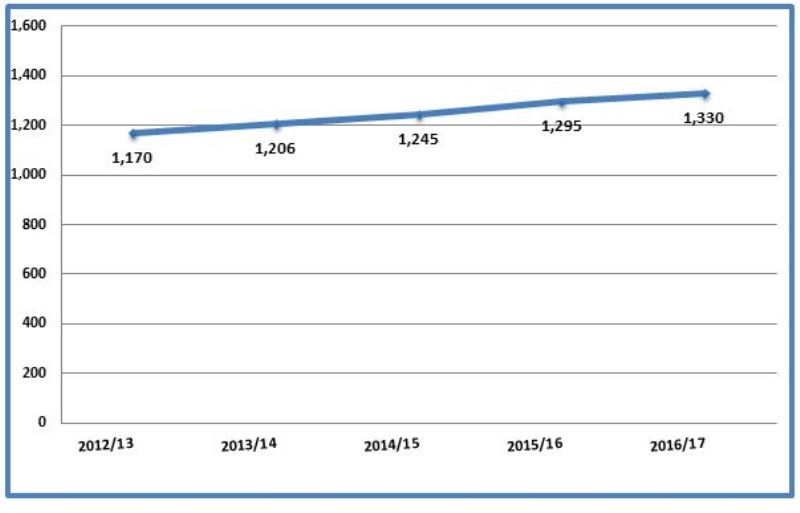 Harare, November 29, 2017– According to the 2017 Open Doors Report on International Educational Exchange data released mid- November by the Institute of International Education (IIE) and the U.S. Department of State Bureau of Educational and Cultural Affairs (ECA), the number of Zimbabwean students in the United States increased by 2.7 percent over the previous year, and the number of American students visiting Zimbabwe rose from 38 to 58 within the same period.

Undergraduates constitute 60.6% of Zimbabwean students studying in the United States, while graduate students account for 23.5%.  Fourteen percent of the students stay in the United States after graduation for 12 to 36 months to do their Optional Practical Training, which is like an internship.  The students are spread throughout various States across the country with the top five receiving states being Texas, Massachusetts, New York, Missouri and Pennsylvania.

“This steady increase in the number of students at American universities indicates a strong desire by Zimbabwean students to seek out the highest level of education and gain valuable career skills before returning home,” said David McGuire, Public Affairs Officer at the United States Embassy.  “U.S. colleges and universities remain the global leader in welcoming students from around the world, and at the same time, remain committed to creating broad exchange opportunities for American students.”

The United States Embassy’s EducationUSA offices houses four advising centers in Harare, Bulawayo, Gweru and Mutare- all of which work to advise students interested in studying in the United States.  The offices receive international admissions officers on a regular basis and have hosted regular fairs to promote awareness of the various study options available to Zimbabwean students.

While the overall number of international students studying in the United States has increased, the number of new international students – those enrolled at a U.S. institution for the first time in fall 2016, declined by nearly 10,000 students to about 291,000, a three percent decrease from the previous year.  This is the first time that these numbers have declined in the six years since Open Doors has reported new enrollments.

While this year’s Open Doors report shows strong growth in the number of international students studying in the United States in the past decade, with an increase of 85 percent since 2006/07 (when there were fewer than 600,000 international students in U.S. higher education), the new findings signal a slowing of growth, with a three percent increase compared to increases of 7 to 10 percent for the previous three years.

IIE works to build more peaceful and equitable societies by advancing scholarship, building economies and promoting access to opportunity. As a not-for-profit with 19 offices and affiliates worldwide, IIE collaborates with a range of corporate, government and foundation partners across the globe to design and manage scholarship, study abroad, workforce training and leadership development programs.

ECA builds relations between the people of the United States and the people of other countries through academic, cultural, sports, professional and private sector exchanges, as well as public-private partnerships and mentoring programs.  Approximately 50,000 participants annually embark on these exchange programs, including the flagship Fulbright Program and the International Visitor Leadership Program.- ZimPAS © November 29 2017.