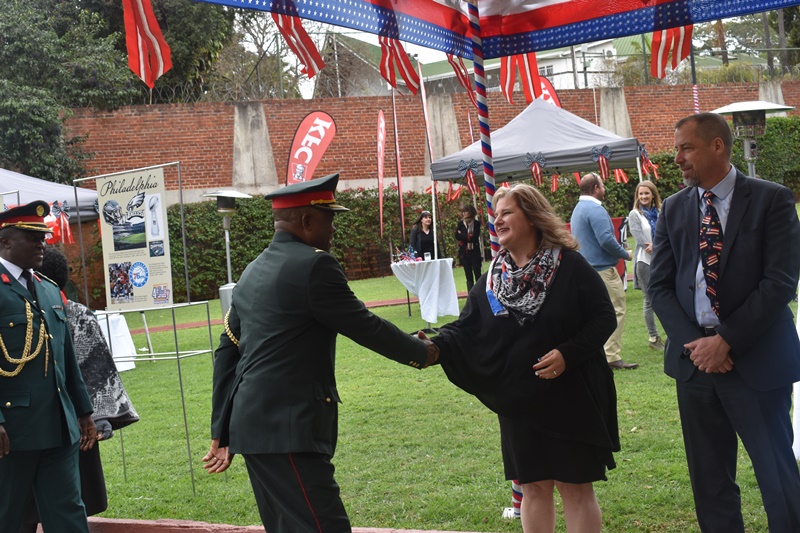 Allow me to start by reflecting on the tragic loss of the lives of Colour Sergeant Stanley Mugunzva and Nelson Dube, victims of the explosion in Bulawayo on June 23rd.  These individuals died in the line of service, but that does not undo the damage done to those they left behind.  Our hearts go out to them and to those injured, and our hopes go with those who survived.  We also mourn the loss of two-year-old Professor Lumbe who died a heinous, unthinkable death last month.  We hope that justice proceeds swiftly in both cases to prevent further attacks and loss of life.  This is why the peace pledge that many of the contesting political party leaders have signed is so important.  We echo your call for an end to violence directed at any party or candidate.

Now let me turn to hope, aspiration, and positivity; and like our Italian colleagues did at their party, we’ll work a little music into the program.

Three years ago, one of our most creative, intellectual, and inspiring entertainers, Lin Manuel Miranda, opened a show on Broadway called Hamilton: An American Musical, about the life of American founding father, Alexander Hamilton.  Our theme today is Philadelphia, the City of Brotherly Love.  Hamilton lived in Philadelphia, the very first capital city of our nation, from 1790 – 1795.

While historians debate Hamilton’s true character, in the play, he was discouraged from speaking out, getting involved, or taking any courageous action, by the far more cautious fellow founding father, Aaron Burr.  Despite the challenges of the times, and despite Burr’s attempts to extinguish his enthusiasm, Hamilton was determined to seize the moment and do the right thing.  This brings us to an excerpt from one of the most famous songs from the musical.  Recognizing that the phrase “my shot” may not translate well across cultures, I hope you will indulge us in employing a bit of American English today.  We are not celebrating the violence of revolution, rather Hamilton taking his shot signifies seizing an opportunity, and taking a chance to speak out and move our nation forward – just as we saw so many here do peacefully last November.

By not throwing away his opportunity – what young Alexander embodied was hope.  On July 4, 1776, the Continental Congress met in the great city of Philadelphia and adopted the Declaration of Independence. Our forefathers were calling for change. For independence. They were young, scrappy, and hungry. They found their voices, and they found hope.

Here in Zimbabwe, independence was won 38 years ago, but freedom from oppression did not immediately follow. Until last November. The people of Zimbabwe found their voices, and dared to hope.   More than at any other time in recent history, the people of Zimbabwe have more freedom to speak their minds.  More freedom to dissent.  More freedom to voice their own vision for the future of Zimbabwe.  This new sense of freedom of expression is monumental, and a fundamental change for human rights in Zimbabwe as long the leaders and institutions protect it. Look, I know that times are difficult and so many Zimbabweans are struggling, but I have to reflect on those days last November when the excitement was palpable here. There may be moments when we feel discouraged, but let’s try to hold on to the optimism we all felt in those days. In the play, the character of Hamilton’s sister-in-law looks around at a nation in the midst of very painful change, and she chooses hope over fear and despair.  She sings:

Look around, look around at how

Lucky we are to be alive right now!

But where does hope come from?  It comes from dreams of something better, from believing that change is possible. We have witnessed some promising signs of change.  President Mnangagwa has called for free, fair, and credible elections.  We have seen the political opposition hold rallies in ruling party strongholds.  We have seen the government invite elections observers and media in irrefutable numbers.  We have seen state media shift from antagonistic to curious about the diplomatic community.  And we have heard that Zimbabwe is open for business.

Sometimes change is dramatic and swift. At other times it is gradual, plodding, it wearily fights an uphill battle. The hangover of past sins rests heavy on the people of Zimbabwe. I know that many of you are asking – we have found our voices, we have found hope, but have we found faith? Do we believe the change we see is fleeting, or lasting? The faith and confidence of the people cannot be restored with a few isolated statements.  It is not one simple stanza that sticks with you from a song.  It will take more than one stanza to convince the people that the power of the vote lies in their hands.  It takes a chorus – multiple voices all singing the same lines together.  It takes a repeated refrain – a line that reappears over and over again.  Such as this:  Zimbabwe, let us not throw away this shot.  What an incredible opportunity you all have, particularly those of you in public positions, to restore public trust in the leaders and institutions of this great country that by all rights should be leading Africa in the 21st century.   Seize that opportunity.  Make your stanza a refrain. Tell people over and over again that their will shall be heard.  Remind them that Zimbabwe is not throwing away her shot.

Turning back to our musical, another compelling moment in the story comes when George Washington told Alexander Hamilton that “History Has Its Eyes on You.”

Let me tell you what I wish I’d known
When I was young and dreamed of glory:
You have no control:
Who lives, who dies, who tells your story

Zimbabwe – you have warmly welcomed elections observers and the media.  History, and the world, have their eyes on you.  This is your chance to show your commitment to democratic principles. At the conclusion of this last song, the playwright puts profound words into the mouth of George Washington who tells Hamilton:  “Winning is easy, governing is harder.”  And the government is doing the hard work.  There is greater space for democratic discourse today than there has been in decades.  Whatever government takes leadership after July 30 must make progress on the ideals that the people of Zimbabwe demand, and free, fair, and credible elections is just one of those demands.  Of utmost importance are human rights reforms – to include reconciliation and accounting for past sins, a meaningful restoration of property rights, and the repeal of oppressive laws.  This goes hand in hand with good governance and harmonizing the laws of the nation with the 2013 constitution.  Finally, Zimbabweans look forward to the economic reforms that will usher into reality the ‘open for business’ sign, including a more efficient bureaucracy and a plan to address the liquidity crisis.

As I draw to a close, what do we want Zimbabwean-American relations to look like in the future?  We must look beyond targeted sanctions to envision a relationship in which trade and investment flow freely between our two nations.  In which American companies thrive in Zimbabwe, and Zimbabwean companies thrive in the United States.  In which Zimbabwean and American academics work together to resolve the health and environmental challenges of the day.  To our militaries working side by side in humanitarian demining operations and in maintaining peace and security.

All of this is contingent upon meaningful change in Zimbabwe.  Winning is easy, governing is harder. We will be so proud to see Zimbabwe join us as a model of democratic principles.  Just like my country, you are young scrappy and hungry and you are not throwing away your shot!

Allow me to offer great thanks to our performers here, and if you’d like to hear more from them, after the toasts, they’ll do a few more numbers from that musical about how the United States came to independence 242 years ago, and also a few tunes from the great city of Philadelphia.  Allow me also to thank our caterer, Crispy Fresh, and the American companies Pepsi, Pizza Hut, and Kentucky Fried Chicken who shared a taste of home with us today.

Finally, allow me to be the first, before he even arrives, to welcome Ambassador-designate Brian Nichols.  In his illustrious career, he has served as our Ambassador to Peru, our Principal Deputy Assistant Secretary of State for International Narcotics Law Enforcement Affairs, our Deputy Chief of Mission in Colombia, and in other positions in Washington, Jakarta, Indonesia, Mexico City, and El Salvador.  And on top of that, he’s a heck of a nice guy.  He will arrive in a few short weeks and our entire community looks forward to welcoming him.

And so, I would ask you to raise your glasses and join me now in a toast:

The United States of America and the Republic of Zimbabwe:

And to our mutual commitment to the promise of our shared ideals for a brighter future for Americans and Zimbabweans.