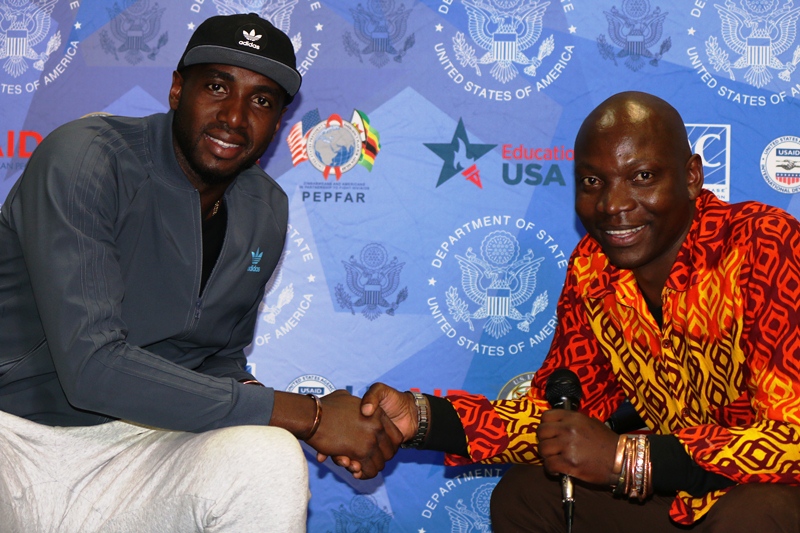 Harare, June 29, 2017: That parents in most of Africa do not place importance in their children pursuing a career in sports is a reality that confronts most students when making choices for their future. With their emphasis on education, parents often cite the stability and security associated with careers in education, medicine, banking and other fields. It is this insistence on education that inspired Cameroonian basketball player Luc Richard Mbah a Moute’s dream to move to the United States- for both sport and education – and  ultimately landed him in the National Basketball Association (NBA), where he currently plays with the Los Angeles Clippers.

Character and the insistence on education by his family, he said on Wednesday, was the catalyst for his rise to stardom.

“I come from Africa and sport is not the big thing here, and parents are always about school, school, school and they wouldn’t let me play basketball,” said the Los Angeles Clippers player.  “That is one of the reasons why I went to the United States because I could play basketball and go to school at the same time.”

Mbah a Moute (30) was guest speaker at a public discussion session hosted by the Zimbabwe United States Alumni Association (Zusaa) and moderated by author and basketball fanatic, Masimba Biriwasha, on Wednesday. The wide ranging discussion allowed members of Zusaa to learn more about Mbah a Moute’s journey from Africa to the United States and back to Africa where he is helping aspiring basketball players appreciate the issues involved in getting to play the sport at the highest level.

But for Mbah a Moute what he originally considered sport for fun turned into a professional endeavor. “I had a chance to go to France to play club basketball and my parents said no, I had a chance to go somewhere else in Europe they said no,” he recalled. “The only time they said yes is because I was going to the United States and I was going to be involved in school and basketball.”

Mbah a Moute, whose father is an elected village chief in Cameroon, was part of the 2003 Basketball Without Borders program. His visit complements the work he has been conducting through the BWB initiative conducting basketball camps for young people in different continents. He facilitated basketball camps in Harare and Masvingo. The visit was facilitated by iBelieve Sports Academy and Fundamentally Astute Athletics with support from the Zimbabwe Tourism Authority and the United States Embassy.

Mbah a Moute is credited with assisting young Cameroonian nationals Joel Embiid and Pascal Siakam break into and excel in the NBA.

During the discussion, Mbah a Moute underscored the importance of character inculcated in his ethos by his parents.  “I always thank my parents because when I was young I got …beat up for everything and I never understood why. I grew up in a middle class family and my parents were really tough, but now I definitely understand because the values they instilled in me are the reasons why I am so successful- hard work, dedication and humility and value people rather than money.”

“I would say character is the most important thing in life, period. If you have character, it really helps you become successful, for sports even better because there is so much stuff going on, you have a lot of money you have got time, sometimes you get into challenges sometimes you handle it sometimes you can’t but the difference is character,” he advised.

He had a message for aspiring sports persons wanting to make it into the big stage. “You got to dream, that’s what I did and it worked for me…you have to find- the only thing that is going to drive you is your dream, you might not make it to the NBA but you will be successful,” said Mbah – ZimPAS © June 29, 2017.