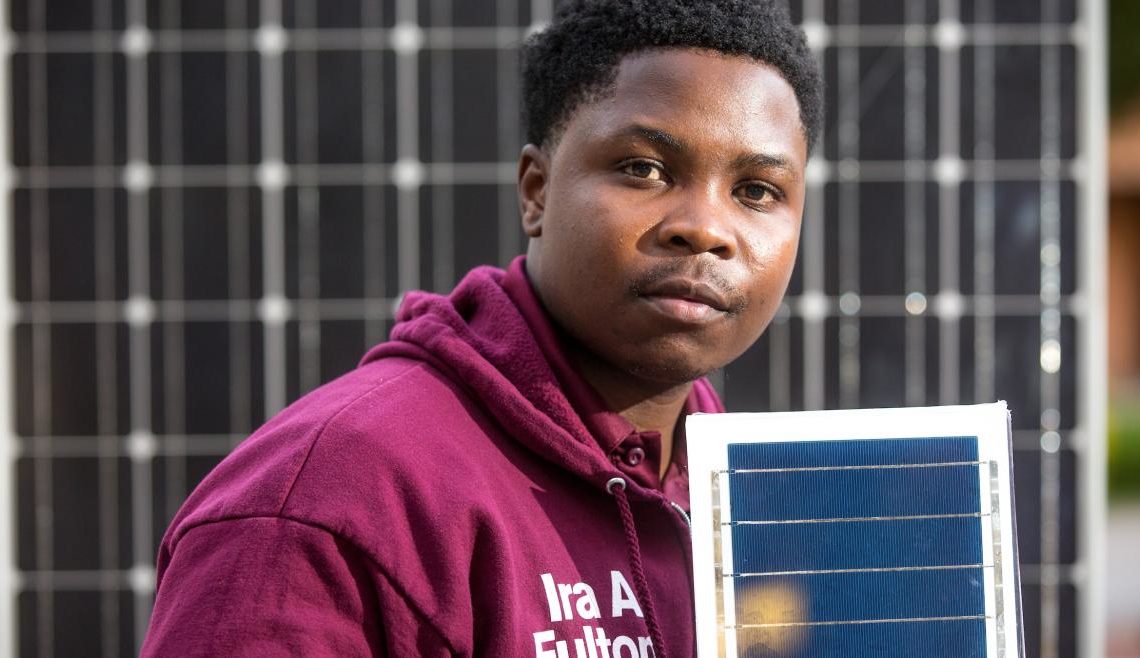 Harare, August 25, 2017: Zimbabwean student Ngoni Mugwisi (24) says he is ready to embark on his doctoral studies that will set him on a path to influence the energy spectrum in Africa.

“Five years from now I will probably have earned my PhD in electrical engineering from Oxford University,” said Ngoni, a graduate of Arizona State University and recipient of the prestigious global Rhodes scholarship. “I intend to be working for an energy company somewhere in the world to learn the applications especially in relation to renewable energy and micro-grids and I hope to probably get an MBA and complement my technical skills and place myself in a position to have the influence to change the energy spectrum in Africa.”

Ngoni graduated with an Engineering Science degree at Arizona State University in May and shared his journey with Ambassador Harry Thomas Jr. recently.

“I am really thrilled about starting my PhD ,” says Ngoni whose journey into the U.S. was courtesy of a an EducationUSA program targeting economically disadvantaged, but academically gifted students exhibiting leadership qualities in 2012. “Growing up, Oxford was a word we read in the dictionaries like oxford press or something like that, but actually having the opportunity to be there and experience the culture, the history and also sharing the classroom with people that I am sure will probably be leading the world in the future is beyond excitement,” he said.

Despite a grueling academic schedule, the former Thornhill High School (Gweru) student has lived up to expectations, giving back to his home country while also working to mentor Zimbabwean students as well as volunteering work to inspire young Zimbabweans.

“My engineering curriculum was very demanding, but I also had to strike a balance between academia and my passions like leadership, social entrepreneurship,” he explains. He and his colleagues founded the Solar Water Solutions project, a nonprofit organization assisting small holder farmers and villagers in Zimbabwe to get access to water at ease. Through the project, Ngoni and his colleagues renovated hand powered pumps with submersible pumps powered by solar energy and increase the water supply for these communities.

“So far we have a pilot that we started in Zhombe (Midlands province) and the communities are really excited because they can dedicate their time to other demands instead of spending a lot of time priming a hand powered pump, “says Ngoni.

He believes engineers should lead innovation as well as drive the technology needed to solve problems in the world. “I think anyone who can apply the laws of nature as well as physics or chemistry or computer technology to solve complex problems is an engineer and should think about getting on that path,” says Ngoni.

He will be part of a group of scholars at the University of Oxford working on the energy and power group. “It’s phenomenal and has the resources and brain power that will enable me to work towards big things,” he adds.

He says the meeting with Ambassador Thomas introduced him to some of the challenges facing the veteran American diplomat working to promote development in Zimbabwe.

“It was a really insightful meeting and such an honor for me to meet a person with his responsibilities and his status;” recalls Ngoni. “He was teaching a class a few years ago at Arizona and he has seen what the place is about and was quite happy that my journey and my story is a testament of what happens when access to education is a priority for higher education institutions. And being a diplomat, he represents that for my country.”

The American diplomat spent a year as a Diplomat in Residency at Arizona State University. However, Ngoni says he is not fooled about the many challenges facing the United States as it navigates Zimbabwean political, economic and social terrain. “I see there are a number of initiatives that are already in place to enable the United States to make a difference in Zimbabwe, for example, the focus on health in Zimbabwe, HIV/AIDS and malaria among other things,” he ponders. “What we need is probable a better working relationship on the part of both countries, and there are no easy solutions to that-it’s something that will take time and deliberate effort both diplomatically as well as politically in this country.”

Achieving this will need individuals like him to come back to Zimbabwe to contribute the knowledge and skills gleaned from the American education system. For Ngoni, Zimbabwe already has what it takes to attract qualified people to the country. However, he worries about the lack of an enabling environment to allow citizens to freely participate in civic issues.

“I think we have a culture of suspicion that thrives in this country that can be discouraging for people to come the country to build,” he says. “It’s this culture, for example, where if people start talking about civic issues, let’s say there is trash on a corner and someone starts talking about it, people start encouraging that person to run for office or if they run for office …they are questions about who are they working for.”

He credits the culture of learning at American universities as a springboard for innovation and success for students seeking opportunities.

“American colleges prioritize the education and learning experience and make educators accessible to their students,” he says.” This….places students studying in the United States a little bit ahead in terms of how far they can go and the kind of feedback they can get on their ideas.”- ZimPAS © August 25, 2017