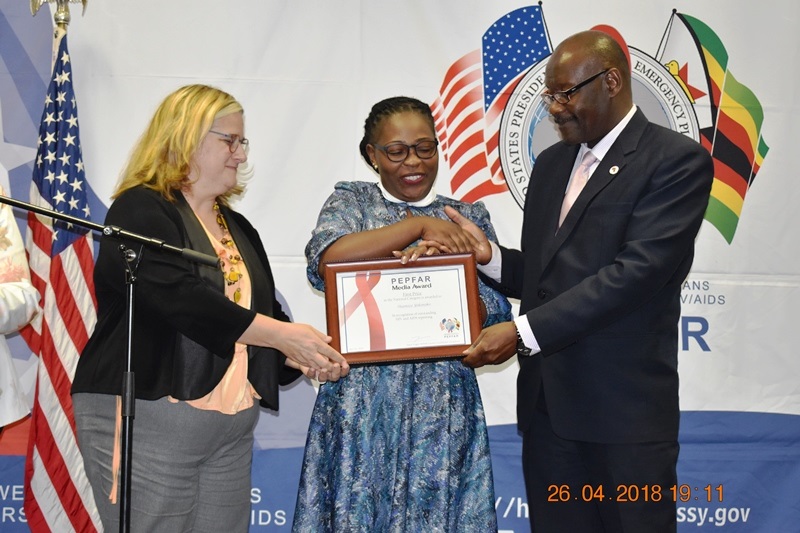 Congratulating the winners, Jennifer Savage, Chargé d’affaires at the United States Embassy, said the awards are a symbol of continued U.S. commitment to ensuring that Zimbabweans had access to information about support services available to those affected by HIV.

“Your commitment to reporting on the issues that affect your communities as well as solutions being implemented by our PEPFAR partners is making a positive impact on Zimbabwe,” she said. ”Since 1980, the United States has continued our committed to support the people of Zimbabwe and we are providing $150 million this year through PEPFAR.  Working with Zimbabwean partners on the ground, PEPFAR provides testing, counseling, medical male circumcision, and treatment among other HIV/AIDS relief services.”

PEPFAR has been supporting the Ministry of Health and Child Care to implement comprehensive HIV programs in Zimbabwe since 2006.  “This collaboration is geared towards attaining epidemic control in line with the UNAIDS 95-95-95 Fast-Track Strategy which aims to ensure that 95% of people living with HIV know their status; 95% of people who know their status access HIV treatment and 95% of people on treatment have an undetectable viral load,” said Mark Troger, PEPFAR Country Coordinator.

PEPFAR programs are implemented through the United States Agency for International Development (USAID) and the Centers for Disease Control and Prevention (CDC). Over the years programs have expanded for orphans and vulnerable children programming through the Determined, Resilient, Empowered, AIDS-Free, Mentored and Safe (DREAMS) program for adolescent girls and young women, ARV commodity procurements and access to viral load testing.

Ms. Savage announced that the U.S. will now support cervical cancer screening.  “This is a direct response to the information received from partners where our support is most needed and would yield the biggest impact,” she said.

The PEPFAR Media Awards was launched in 2015 as a joint initiative between the Public Affairs Section and the Health Journalists Association of Zimbabwe (Hejaz), bringing together health and science journalists in Zimbabwe. The partnership started with training sessions to enable journalists to accurately inform the public about the ever-emerging innovations and technologies people can use to stay educated on how to live a healthy life with HIV and how to prevent transmission.  The first actual contest concluded in 2016 and this is the second contest, which concluded in 2017.