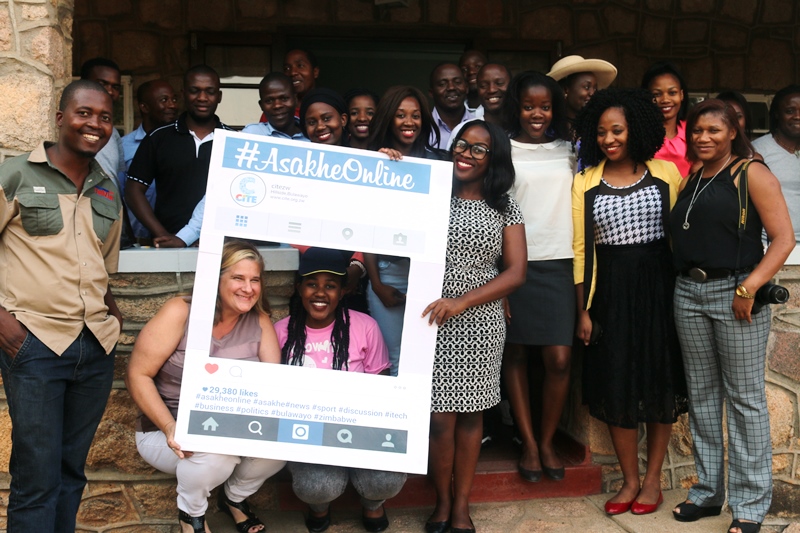 Ms. Savage with youth and trainers at CITEZW in Bulawayo on October 18th.

Bulawayo, October 25, 2017– A senior United States Embassy official says citizens can contribute towards the successful conduct of elections if they constructively use citizen journalism techniques to share information about their experiences as well as challenges members of the public face during the electoral process.

“We don’t want to have a flawed election; we want the election to be free, fair and credible,” said Ms. Jennifer Savage, Deputy Chief of Mission at the United States Embassy. “We want the registration process to be open to all. If they start to hear that people are complaining, and people are concerned and can’t register, then it is not free, it is not fair. Really, this is where you as citizen journalists have a great opportunity to get the word out there, and get it to the authorities.”

Ms. Savage held a wide ranging discussion with youth participating in a citizen journalism training on the premises of the Center for Innovation and Technology (CITEZW) in Bulawayo

last week. The youth included young girls between 18 and 25, receiving skills training from CITEZW under the “We are the Future” initiative aimed at equipping young girls with digital skills, but also enabling them to produce regular reports on developments in their respective communities.

The interaction with the senior United States Embassy representative allowed the youth to ask questions about prospects for scholarships in the United States, among other issues. However, U.S. support to independent media came into focus with youth eager to use technologies such as mobile phones to contribute to the free flow of information in the public interest.

“A lot of people talk up WhatsApp because of anonymity,” said Ms. Savage, challenging the youth to be courageous in ensuring that authorities rectify anomalies at all stages of the electoral process. “I would encourage you to be courageous, step up and put your name on it and say this is what I saw,” she said noting that authorities had an obligation to act on challenges faced by members of the public during all stages of the electoral process.

The United States has supported professional development of Zimbabwean media professionals, including citizen journalists, through capacity building training by American and local media experts, professional exchange programs for journalists, as well as peer mentoring programs targeted at bridging the gender divide in the mainstream media sector.

Encouraging the youth to be courageous in telling stories about developments in their communities, Savage said citizen journalists, like mainstream journalists, occupied a special role as members of the fourth pillar in the democracy establishment.

“In the United States we talk this system of checks and balances a lot between the Executive, Congress and the Judiciary,” she explained. “It’s a three-way triangle and they all check on each other…we often talk of journalism as the fourth leg of that pillar. Journalists and the media are what keeps us honest. We could lie to each other, start corruption and scandals, but we know the media is watching. They are the ones that keep us in check. And that is also true here in Zimbabwe.”

CITEZW was established by media activist Zenzele Ndebele and offers a space where young people from different backgrounds and professions meet, discuss ideas and collaborate on various development projects and social inventions.  The organization runs initiatives like the recently launched youth focused online discussion platform- AsakheOnline (“Let’s Build”). The platform offers content on demand and streams live on the CITE Facebook, Instagram, and Twitter pages. The shows are also available on YouTube and highlights are shared via Whatsapp. – ZimPAS © October 25, 2017.