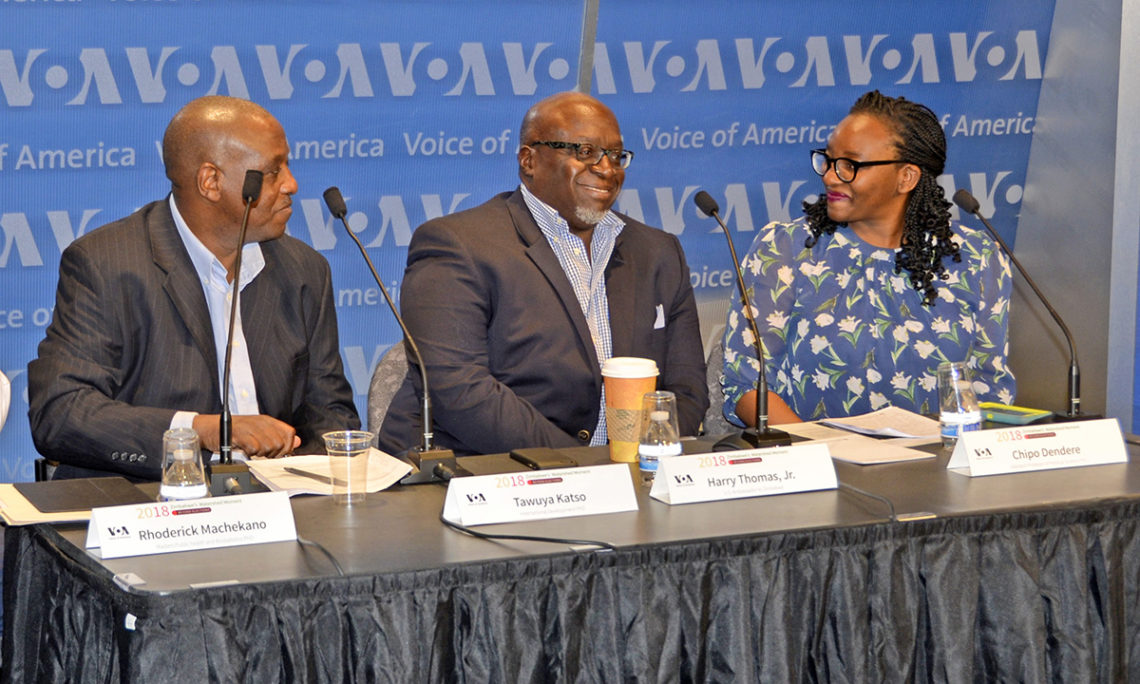 Washington, April 21, 2017: United States Ambassador Harry K. Thomas Jr. says the future of Zimbabwe is bright and his country will continue with the commitments it made to Zimbabwe since the country gained its independence in 1980. The U.S. diplomat was one of the panel members along with U.S. based Zimbabwean political science and development experts.  The discussion, held to celebrate Zimbabwe’s 37th independence anniversary, was live streamed on social media and VOA Africa’s websites and is available online. Below are excerpts of Ambassador Thomas Jr.’s comments during the discussion:

“We hope the future is bright and I will highlight why the United States government thinks it is. Our commitment remains to Zimbabwe. We are building a $200 million embassy; we have 700 Zimbabweans working every day who get paid in United States dollars, $32 million each year is for Zimbabweans as salaries. We give $150 million (annually) to PEPFAR (the United States President Emergency Plan for AIDS Relief); we have reduced deaths due to HIV from 25 percent to under 12 percent in the past decade or so. And with another $150 million we are feeding 2.4 million of the 4.1 million food insecure people in Zimbabwe. So we are the largest donor, and of course we are so pleased that so many of the Zimbabweans come to the United States to study, Texas being the largest receiving State (for Zimbabwean students), but Harvard being the number one university that has produced Zimbabwean Rhodes scholars- three in the last three years. …Zimbabweans parents ensure that their children get education and some of these are represented by this panel…”

…On U.S. policy on Zimbabwe under the new administration

“I cannot answer hypotheticals. I can say that we have a new senior director for African Affairs starting at the National Security Council this week. The President has yet to appoint an Assistant Secretary for African Affairs, so we will have to wait for that person to be appointed, then see what type of policies that that person will implement for all of Africa. That said, as I said, our policies have stayed and remained the same in terms of remaining the largest donor in assistance and obviously wanting to ensure that there is free and fair elections in 2018. We join the rest of the world in that. It is still very early in the administration to ask macro or micro questions about U.S. policy.”

…On Criticism of U.S. Targeted Sanctions

“If you look at the economy; what are the challenges? There has not been proper management of agriculture. President Mugabe himself listed how many millions and billions of dollars have gone missing in mining. That wasn’t the United States who said that. That was President Mugabe. The other thing is that Zimbabwe was in arrears to IMF and the World Bank for years. They have settled with IMF not AFDB. Those things started before sanctions were imposed, because Zimbabwe stopped paying its loans when it was off in the (Democratic Republic of) Congo, (Zimbabwe) stopped paying its loans and those are facts. I’m very happy, we are not perfect at all, we make mistakes, (but) I am very happy to deal with challenges, mistakes, anything in terms of facts. But we don’t get facts, we get emotion, name-calling, refusal to accept what you have done. It’s a challenge but facts are facts. There is a lack of investment right now, but we don’t block American companies from coming to Zimbabwe. The reason why companies from all over the world are not coming is because they can’t get their money out. So if you want to have companies, whether they are Zimbabwean or American…people have to be able to make money, they have to get their money out; they do not have to be visited by the taxman if they say something that is against the government; they do not have to be harassed to contribute to events (every time) they say something against the government. You have to have an honest judiciary. It’s very simple in countries who recover economically- ease of doing business; ability to get your money; honest judiciary – those would help.”

“The tourism industry has tremendous potential. 50,000 Americans come to Zimbabwe every year to go to Victoria Falls. We would like to see tourism expand throughout the country but that would need incredible infrastructure. You have seen what happened in countries like Cambodia where 20 or 30 years later they have been able to build and reform and every year people go to Angkor Wat. So we would like to see those things as well as agriculture, which I think personally, is a great future for Zimbabwe, a potential to be the breadbasket if irrigation schemes are put in. And property rights, you have to have property rights.”    – Zim PAS © April 21, 2017