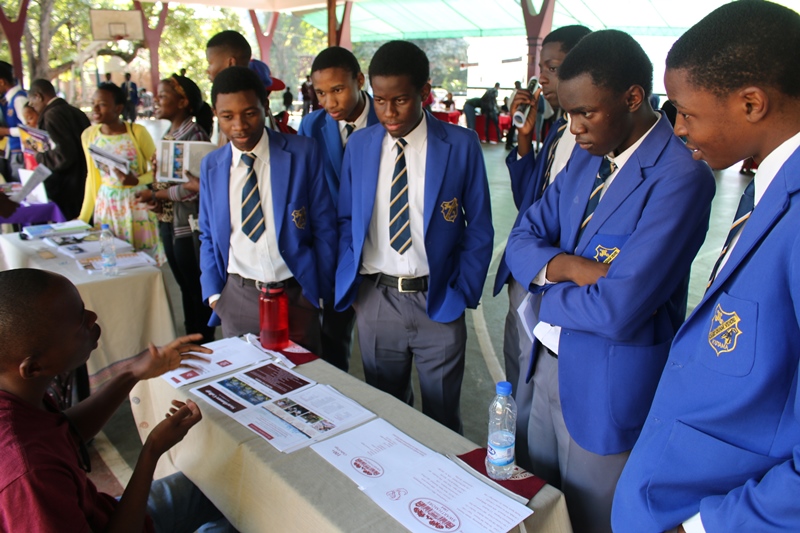 “This year we are very pleased that $7 million in scholarships were awarded to Zimbabwean students to study in the United States and we hope we will have more next year,” said  the United States Ambassador on the sidelines of the American colleges and university fair held at Prince Edward School last Saturday. “It’s a tribute to the academic achievements of Zimbabwean students and the generosity of the American people,” he added. He said the gesture, along with others like the 60 youth leaders selected for the Mandela Washington Fellowship currently in the United States, demonstrated his country’s commitment to supporting education in Zimbabwe.

According to information provided by EducationUSA Advising Center, the beneficiaries of full four year scholarships from the United States include students from rural and urban high density high schools.  At the American Colleges Fair, hundreds of visiting students and their parents asked questions about attending the various institutions, including negotiating the application, admissions and visa processes.

The fair in Harare, coming a week after a similar event was held at Bulawayo’s Eveline High School, was attended by over 400 individuals, mostly high school students and parents. Current students and alumni from 30 American universities represented their alma maters. They provided information about their college experiences and memories with students who want to learn about scholarships, campus, and college life at a wide variety of colleges and universities.

Each year, the United States hosts over 1,200 Zimbabwean students pursuing academic and professionals’ studies at various universities and colleges.  In 2015 alone, the Embassy issued 518 student and exchange visas to Zimbabweans.

The Embassy’s Public Affairs officials said the fairs in the two cities provided students with an opportunity to expand their options for higher education study, including deserving but economically disadvantaged students.

“Each year, we support more than 40 students with funds to apply to U.S colleges, through the opportunity fund program,” said Tafadzwa Muzhandu, Education USA Country Coordinator. She said EducationUSA Advising Centers in Harare (Eastgate), Bulawayo Public Library, Gweru Memorial Library and Turner Memorial Library in Mutare met and talked to more than 30,000 Zimbabweans each year and at least 300 of these students apply for competitive scholarships at American colleges and universities.

The U.S. government, through its Opportunity Program, actively creates opportunities for such deserving economically disadvantaged students through support to programs like the United States Achievers Program (USAP) implemented through Education Matters. For nearly one year, USAP recruits go through seminars and workshops which empower them to negotiate the application processes and gain scholarship funding to top American universities and colleges such as Yale, Harvard and Brown University.