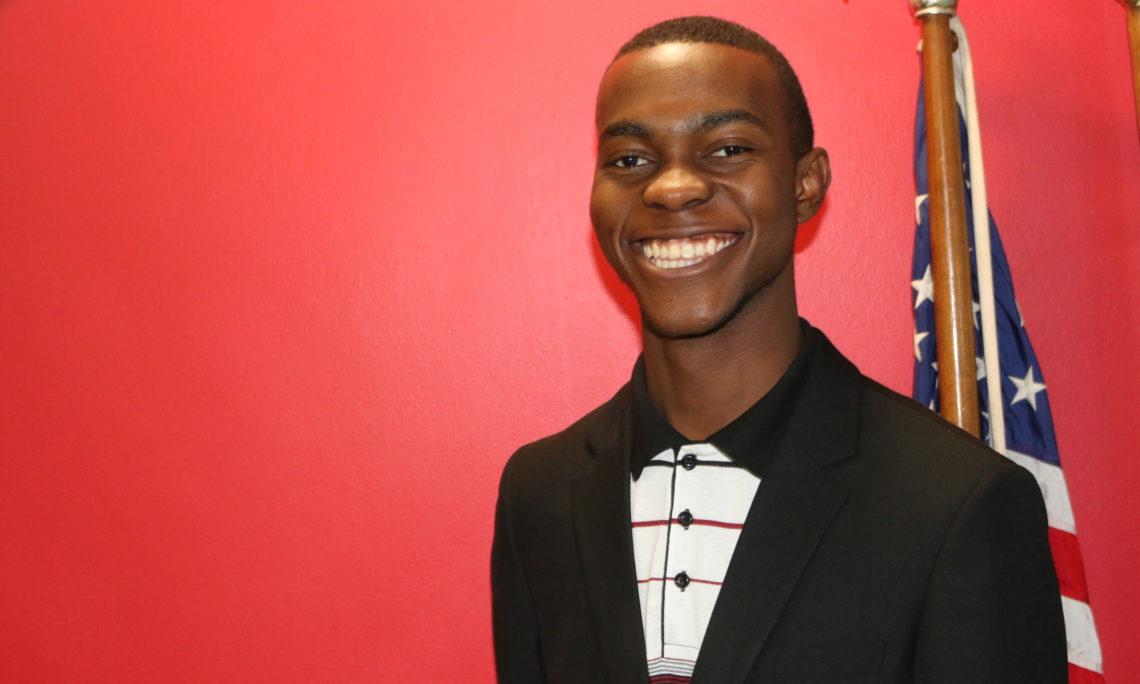 Harare, June 21, 2017: Eagerness to learn and find innovative solutions to common challenges has landed a young Tanaka Chingonzo a scholarship to study at the United States’ College of Wooster in Ohio. He travels for the four year study this August, hardly his first trip to the United States in search of knowledge.

“I am constantly excited about finding the next opportunity, building my next friendship, and finding new avenues for growth…this is what excites me about the coming four years at the College of Wooster in Ohio- a prestigious research focused college,” says the 18 year old graduate of ZRP High School in Hatcliffe.

He credits his success to the initial journey he took to accompany his brother, Mandela Washington Fellowship alumnus Takunda Chingonzoh, to an entrepreneurship event.

“Attending that Startup weekend in May 2014 found me jointly founding a company with a talented group of individuals. Our team was known as Combicode and we were working around making commuter omnibuses safer for the average Zimbabwean,” he recalls. In 54 hours, the team came up with a working prototype of their solution, eventually winning third prize at the event.

“As a 16-year-old, interacting with distinguished industry and thought leaders- entrepreneurs, business professionals and software developers, marketers, and designers, I remember a distinct sense of awe at the innovation ecosystem that then and especially now, exists in Zimbabwe.”

He says it was at the Start Up event that he resolved that his future lay in harnessing technology to solve problems. Two years later, Combicode has re-branded to Quick Online Reference and helped organize the last Harare Startup Weekend event- the same event that conceived it.

During his high school days, Tanaka was student CEO of Verity Holdings ZRP High School Junior Achievement Zimbabwe, a company established by students with support from school authorities to encourage the entrepreneurial spirit among its students. Among other activities, the company had commercialized the process of converting waste plastic into floor polish and had been producing it for consumption by the school and the surrounding Hatcliffe community. The initiative won several accolades including an award at the Sanganai- Hlanganani international expo and EMA Environmental competitions.

With such a foundation, Tanaka was able to participate at Watson University. The university pioneered a new model of higher education that enables remarkable young people from across the world to gain access to the resources they need to build startups and solutions to the world’s problems, while earning a degree and skills very relevant and practical to the problems they are trying to solve.

“They accepted my application and I spent the first few months of 2016 at the world’s first, degree bearing incubator program in Boulder, Colorado USA to continue my work on the Pamwe project,” says Tanaka. “My four months at Watson enabled me to attend the Global Engagement Summit held at Northwestern University, annually in April. The Summit welcomes young people from the world’s universities working on building and running ventures to solve the world’s problems.” He also attended the conference on World Affairs at the University of Colorado-Boulder, interning at Spark Boulder- a co-working space similar to the Udugu Institute supported B2C at Batanai Gardens in Harare.

“This enabled me to interact with the Boulder community in a way I otherwise would never have been able to. I met a Product manager at Google who later organised a tour of their Boulder campus which truly opened my eyes to the possibilities that lie in technology,” says Tanaka.

Back to Zimbabwe, Tanaka has worked as an intern with the EducationUSA Advising Center at the Embassy’s Eastgate offices, working to make opportunities much more accessible to Zimbabwean students. “I was only able to attend Watson University because the Education Advisor at Education USA, who had been helping me as I applied to American colleges, recommended the opportunity to me.  It changed my life. I urge every student to visit  EducationUSA Advising center nearest to them if they are interested in pursuing an education in the USA or cultural and entrepreneurial exchange programs that may exist there.”

In addition, he has taken advantage of the diversity that American education allows and before he even starts college has already picked up on skills such as Web development which he does in his spare time. He has built websites such as Apply.co.zw and manages his own-  tanaka.co.zw- as well as taking on client work – ZimPAS © June 21, 2017

ZimPAS is a product of the United States Embassy Public Affairs Section. Comments and queries should be referred to Nicole Finnemann, Tel. + 263 4 758800/1; E-mail: hararepas@state.gov, Url: https://zw.usembassy.gov