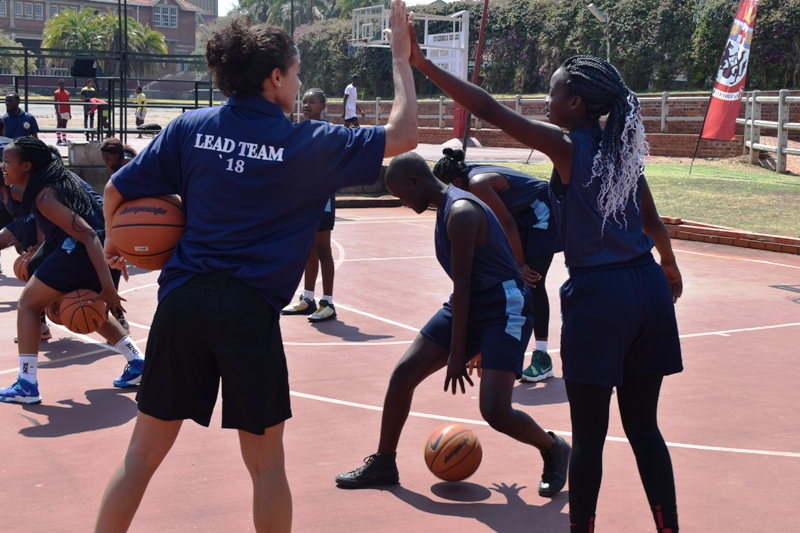 Andraya Carter with one of the participating girls

Harare, August 27, 2018: A three-day basketball camp for under 17 girls ended on Sunday at the Harare International School in Mount Pleasant. The ‘Lead Camp 2018’ exposed the 40 youthful female participants, selected from Zimbabwe’s 10 provinces through a rigorous process, to basketball and life skills under the tutelage of top basketball coaches from the United States and Zimbabwe.

“We had 40 of the best basketball prospects in Zimbabwe, under 17 girls and we put them in the best basketball environment for any young girl that aspires to play college basketball or for the national team,” said Belia Zibowa, camp organizer. “In addition to basketball, this camp was about life skills and career paths the young girls can take through sport.” Zibowa, an alumnus of the United States State Department Global Sports Mentoring Program working to empower international leaders to impact their communities through sport, said the camp’s goal is to encourage talented girls to pursue basketball as a sport.

The two visiting American coaches- Andraya Carter and Sherrie Session- took the girls through their paces over three days with the assistance of local coaches including the Zimbabwe National Under 20 Basketball Coach, Tawanda Chitsinde. Other local coaches were Charmain Chirinda from Bulawayo, Nash Majoni and Tapuwa Maguyana from Mutare, and Harare based coaches Evans Gasva and Clement Kupfekera.

The coaching clinic benefitted from the experience of Carter, a recent graduate of the University of Tennesse, who was a member of the 2010 USA Youth Olympic Games Team that posted a 6-1 slate and captured the bronze medal in Singapore. In 2015-16, Carter was named the Arthur Ashe Jr. National Sports Scholar of the Year and Miss Tennessee at the Volscars, both in recognition of her balance of athletics, academics, leadership and community service. Her involvement in the sport has defied odds given the multiple surgeries and countless rehab sessions she has had to endure throughout her career.

Her compatriot, Session, is Assistant Coach for John Carroll University women’s basketball team. She has also coached at Marlborough School in Los Angeles, California and spent time as a coach and trainer at the 2015 Nike Jr. Drew League, working with top youth players on the west coast.

National under 20-basketball team coach, Tawanda Chitsinde, said girls’ basketball in Zimbabwe still faced a number of challenges, chief of which was the reluctance by parents to let girls play the sport, which has led to funding shortages hindering its growth. He paid tribute to the visiting coaches.

“We wanted to help these kids,” he said. “Yes they know how to play the game, but fundamentally, we thought we were skipping a whole lot of things, so we are grateful to these coaches from the United States who came to help us with the fundamental skills which are very key for one to be a good basketball player or any sport that you are involved in.”

Whether they were competing on the basketball courts or acquiring life skills, the participants gained insights about using sport to advance in their education and careers, a key goal of the United States Sports Exchange Programs. – ZimPAS © August 27, 2018