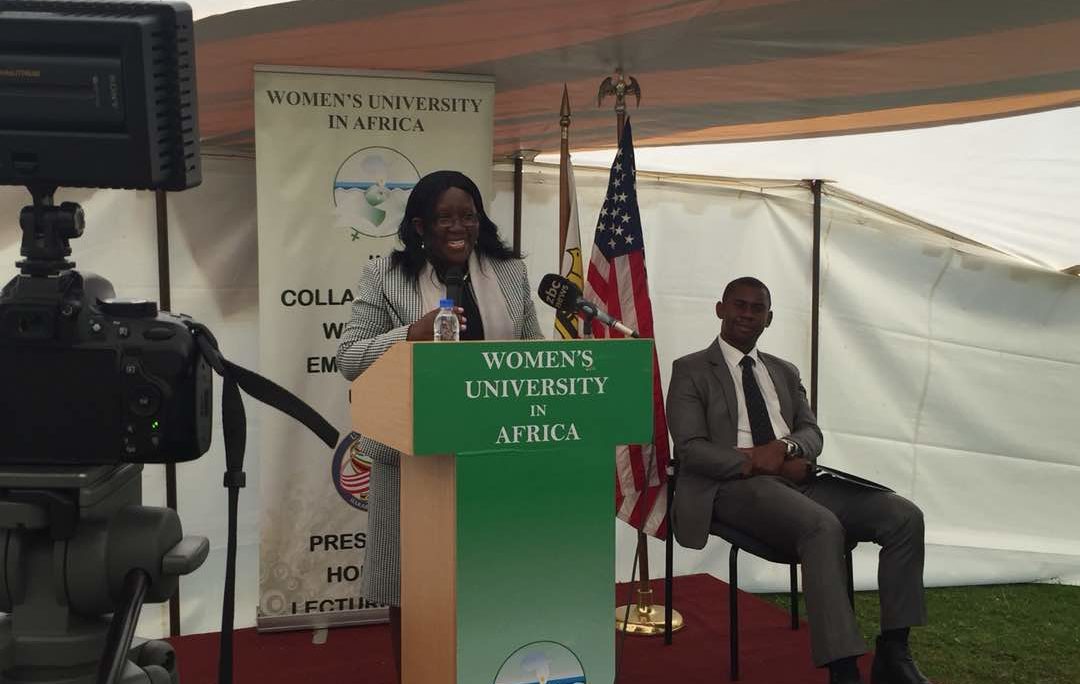 Harare, March 29, 2018: A senior official at the Zimbabwe Central Bank says there is improvement in women’s participation in institutional decision making.  Addressing the Hope Fay Lecture at Women’s University in Africa on Wednesday, Dr Jesimen Tarisai Chipika, Deputy to the Reserve Bank Governor spoke on the topic “Women and the economy in Zimbabwe: A drive towards financial and economic inclusivity for sustainable development.”

“Although improving, women remain marginalised particularly in institutional decision making, yet we know that household welfare, hence, the whole population, both in terms of production and reproduction, depends on women,” said Chipika.

“This lack of a ‘human face’, in particular, a ‘woman’s face’ in banking and finance matters has been a serious weakness in the development discourse and practice, partly responsible for the development paralysis we face today,” noted Dr Chipika.  She also noted that there is now a shift in favour of the Development Financing discourse, particularly, under the 2030 SDGs Agenda, to which Zimbabwe is a signatory.

Dr. Chipika said women are still marginalized in the economy even as they are major economic players and in most cases they only dominate smallholder agriculture and Micro, Small and Medium Enterprises (SMEs) in most sectors.  Dr Chipika was concerned that out of 19 large bank CEOs, only one is a woman; of the 60 Zimbabwe Stock Exchange (ZSE) listed companies, only three are headed by women; of the 103 state owned parastatals, only 15 are headed by female CEOs.

The thought-provoking discussion which drew a diverse audience of nearly 250 participants at WUA’s new Manresa campus was held to commemorate Women’s History Month, celebrated in March.

An official from the United States Embassy hailed the discussion and pledged her country’s support to efforts to reduce the negative effects of the marginalization of women in key sectors.

“By creating opportunities for women in new arenas, U.S. government programs are stimulating economic development and erasing lingering stereotypes for all Zimbabweans, particularly women”, said Stacy Lomba, Public Diplomacy Officer at the United States Embassy.  She shared some of the contributions the U.S. Embassy and its agencies are doing to empower women in the form of grants, training and access to capital for women and small business owners.

The lecture series named after founders of Women’s University in Africa Hope Cynthia Sadza and Fay Chung is sponsored by U.S. Embassy in Harare. Since April 2012, the lecture series- held March and September- have discussed fundamental subjects and issues affecting women in Zimbabwe, such as trafficking in persons, child marriages and the negative role that patriarchy can play in women’s emancipation.

Acting Vice Chancellor Dr Elizabeth Chikwiri hailed the partnership with the Americans. “It was with His Excellency, (former) Ambassador Charles Ray then and all his successors have continued with the project bringing over ten speakers on various topics that included child marriages, human trafficking, women and disabilities, the role of investigative journalism in the plight of the girl child among others”, said Dr Chikwiri. – © ZimPAS © March 29 2018.