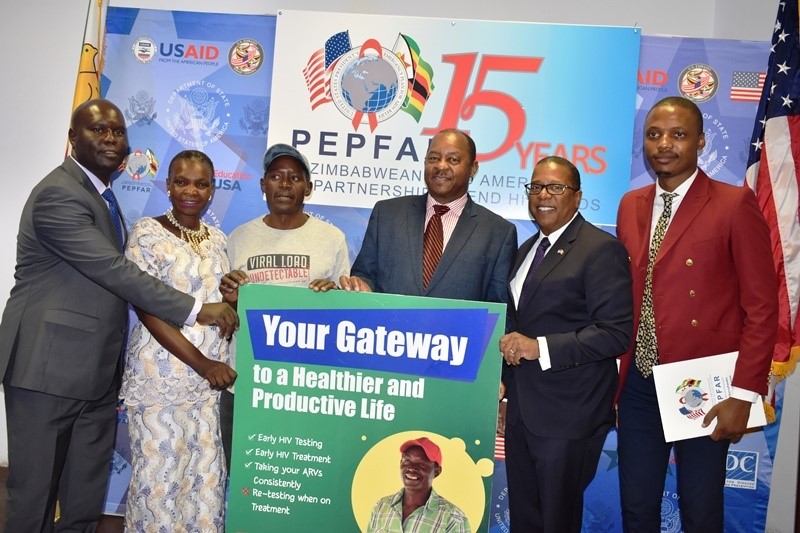 Harare, November 20, 2018: The United States Embassy marked the 15th anniversary of the President’s Emergency Plan for AIDS Relief (PEPFAR) pledging $150 million in annual commitments to Zimbabwe HIV/ AIDS fight as well as announcing new initiatives to reach Zimbabweans with messages to contain the disease. At an event last Friday speakers hailed the achievements through partnerships with PEPFAR since it was introduced in Zimbabwe in 2006.

Celebrating Milestones in HIV and AIDS

“I have witnessed how PEPFAR strengthens laboratory functionalities throughout Zimbabwe, at Chitungwiza Hospital in particular, where I worked,” said Dr Obadiah Moyo, Minister of Health and Child Care addressing the gathering attended by senior government officials, civil society organizations, journalists and Embassy officials. The minister said PEPFAR is also strengthening infection control in a number of hospitals. “PEPFAR has become a brand of choice and most importantly continues to save lives,” he added, noting the “amazing collaboration” between his ministry and the PEPFAR team in the development of the country operational plan (COP).

Welcoming guests at the event, councilor Herbert Gomba, Mayor of the City of Harare said the city had received 20 pre-fabricated porta cabin clinics, among other HIV initiatives conducted in the city. “The City of Harare and the U.S. has a long mutual beneficial relationship,” said Mayor Gomba. “As you may be aware rural urban migration has resulted in more people seeking health services, the pre-fabricated porta cabins have eased space shortages for the city especially for anti-retroviral therapy.”  PEPFAR support to Harare was substantial in 2018.  PEPFAR through USAID and CDC has provided comprehensive HIV risk  reduction to 10,319 female sex workers and men who have sex with men.  More than 49,000 orphans and vulnerable children in Harare during FY 2018I, and essential care and support services to.  PEPFAR also tested more than 455,000 individuals for HIV, identified more than 31,000 HIV+ individuals, initiated treatment on almost 25,000 individuals, and facilitated the circumcision of nearly 27,000 young men as a life-saving HIV prevention method.

Margaret Cement (42), living positively since 1998, said the introduction of PEPFAR had tremendous benefits for the people of Zimbabwe. “Now there is access to ART for free through PEPFAR,” said Ms. Cement. She said she lost a baby in 1999 because pediatric ART was available but not affordable. “I have given birth to three HIV negative health babies. I am a living testimony of how PEPFAR is saving lives. I urge all those who are on ART to adhere to their treatment.”

Reaffirming his country’s commitment to assisting Zimbabwe in the fight against HIV and AIDS, United States Ambassador Brian Nichols paid tribute to his predecessors and said he looked forward to continuing our strong collaboration with the Ministry of Health and Child Care to ensure Zimbabwe meets the 90-90-90 target set by UNAIDS.

“We are closer than ever to controlling and ending AIDS,” said Ambassador Nichols. “What once seemed impossible is being achieved through the power of partnerships. “The United States government affirms the commitment it made to the people of Zimbabwe at independence in 1980- to work together to promote democratic institutions, equitable economic growth, food security, and public health.”

PEPFAR funding to Zimbabwe has increased from $22 million in 2006 to $150 million in 2018. The over $1 billion in support has supported HIV prevention, care and treatment services. Through partnerships with the Ministry of Health and Child Care, the annual number of HIV related deaths has declined 80% since 2006 while the annual number of new HIV infections has decreased by 45% since 2006.  Over one million people are on life-saving antiretroviral treatment (ART)

At the event, the 2019 PEPFAR Media Awards Contest was launched.  “We are encouraged by the coverage of the work partners working to contain the HIV/ AIDS pandemic receive,” said Mark Troger, PEPFAR Country Coordinator. “Most importantly, we are excited that you are reaching the hard to reach audiences with positive messages on access to HIV and AIDS related services.”

He encouraged media to promote understanding on retesting for HIV; undetectable viral load and reaching men with key messages on HIV. “It is now scientifically proven that people who take their ARVs and are virally suppressed do not transmit the disease,” said Troger. “This is why it is so important for people to adhere to their treatment.  Not only will they stay healthy, they will not infect others.  The people of Zimbabwe need to know this.”

Since its establishment in 2003, PEPFAR has invested more than $80 billion in the global HIV/AIDS response – including through U.S. bilateral HIV and tuberculosis efforts as well as our contributions to the Global Fund to Fight AIDS, Tuberculosis and Malaria – the largest commitment made by any nation to address a single disease. The program has received strong bipartisan support across three U.S. presidents and eight U.S. congresses.- ZimPAS © November 20, 2018