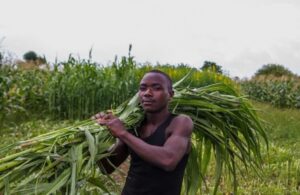 In his opening remarks, Ambassador Brian A. Nichols applauded the work that USAID partners are doing to improve the lives of Zimbabweans. “USAID-supported programs have assisted more than 350,000 Zimbabwean small scale, subsistence farmers to increase their yields, incomes, food security, and self-reliance. I have seen what they are doing, and their work in the field is incredible.”

In addition, USAID works with the poorest communities to tackle the root causes of food insecurity and poverty and build resilience for generations to come.  This includes creating and repairing more than 1,700 community assets, including dams, irrigation systems, and dip tanks throughout the country.  It also includes assisting subsistence farmers to grow more nutritious food for their families, sell their surplus, make money, and put themselves on a path to self-reliance.

USAID/Zimbabwe Mission Director Stephanie Funk stated: “USAID has robust food security programs.  We assessed the deteriorating food security situation and the increasing shocks faced by millions of Zimbabweans, and we adapted our activities to not only meet the immediate humanitarian imperative for the most vulnerable, but also take a longer-term look at building resilience so that small-scale farmers advance on their path to self-reliance.”

In 2019, the United States provided US$370 million in assistance to support the people of Zimbabwe.  For more than 30 years, the American people, through USAID, have contributed over $3.2 billion in assistance to Zimbabwe.  Current projects include initiatives to increase food security, support economic resilience, improve health systems and services, and promote democratic governance.