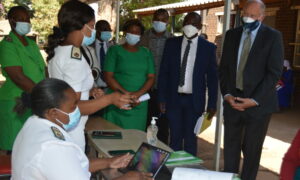 On December 1st each year, World AIDS Day prompts us to reflect upon our collective efforts to bring the HIV epidemic under control and end AIDS as we know it. We wear red ribbons to commemorate those who have lost their lives and the struggles of those still living with the disease.

For 2021, the U.S. government’s theme – Ending the HIV Epidemic: Equitable Access, Everyone’s Voice – reflects our strong commitment to end the HIV epidemic not just in the United States, but globally.  In Zimbabwe, the U.S. Embassy celebrates PEPFAR’s ongoing efforts to achieve sustained epidemic control of HIV and reaffirms our deep commitment to ensure that the diverse voices of all affected ages, genders, and population groups are heard and valued in the global AIDS response.

PEPFAR’s support to Zimbabwe, including the $1.7 billion we have invested since 2003, has vastly and positively changed the direction of the HIV epidemic.  In 2022 we will continue to provide services for the 1.2 million Zimbabweans living with HIV and support thousands of Zimbabwe health care workers who carry out this critical work.

The United States believes donor financing and support for the national health sector, if done right, results in improved systems that provide equitable access to quality services.  Outsiders merely pouring money into the country will not do the trick.  To make progress toward sustainable health financing, the Government of Zimbabwe must prioritize health in its budgeting process and implement sustainability plans to prepare for the eventual phase-out of donors’ support.

In the fight against HIV – as in all wars – there are heroes who contribute significantly to the dramatic progress.  In May 2021, PEPFAR sent out a nationwide call for nominations of “PEPFAR Heroes” – Zimbabweans who have done extraordinary work to improve the lives of people living with HIV.  From a list of more than 100 nominations, the public voted on the top 12 heroes.

On World AIDS Day, the United States honors these “PEPFAR Heroes” who have gone above and beyond and have shown commitment, passion, courage, and dedication to serve Zimbabwe’s communities.  The heroes being honored include a nurse living openly with HIV who inspires her clients to test and, if infected, immediately start treatment; a journalist whose stories on HIV/AIDS have helped shed light on the struggles of key populations and marginalized communities; a researcher who led the first and second Zimbabwe Population-based HIV Impact Assessment (ZIMPHIA) surveys; and a fearless advocate for Zimbabwe’s transgender and intersex communities.  These are just a few of the amazing stories.  The 12 individuals are: Chipiwa Mugabe (47); Godfrey Musuka (50): Gumisayi Bonzo (51); Nkululeko Luphahla (57): Robert Tapfumaneyi (47); Simplicio Chilo (35); Phakamani Moyo (29); Olive Mutabeni (60); Margaret Cement (45); Tariro Chikwanha (59); Senzeni Chidziya (56); and Ticharwa Masimira (69).

We could use a few heroes right about now.  We are at a crossroads in the global AIDS response, and the choices we make now will have critical implications for years to come.  After decades of progress, our work is not yet finished.  If we falter, millions more people will be infected with HIV, and millions more people now living with HIV will die of AIDS.

But if, together, we confront the challenges before us with conviction and compassion – and all of us be a little more heroic – we can pave the path to end the HIV epidemic everywhere and secure a better future for everyone.

Thomas Hastings is Chargé d’Affaires at the United States Embassy

Originally published in the Daily News