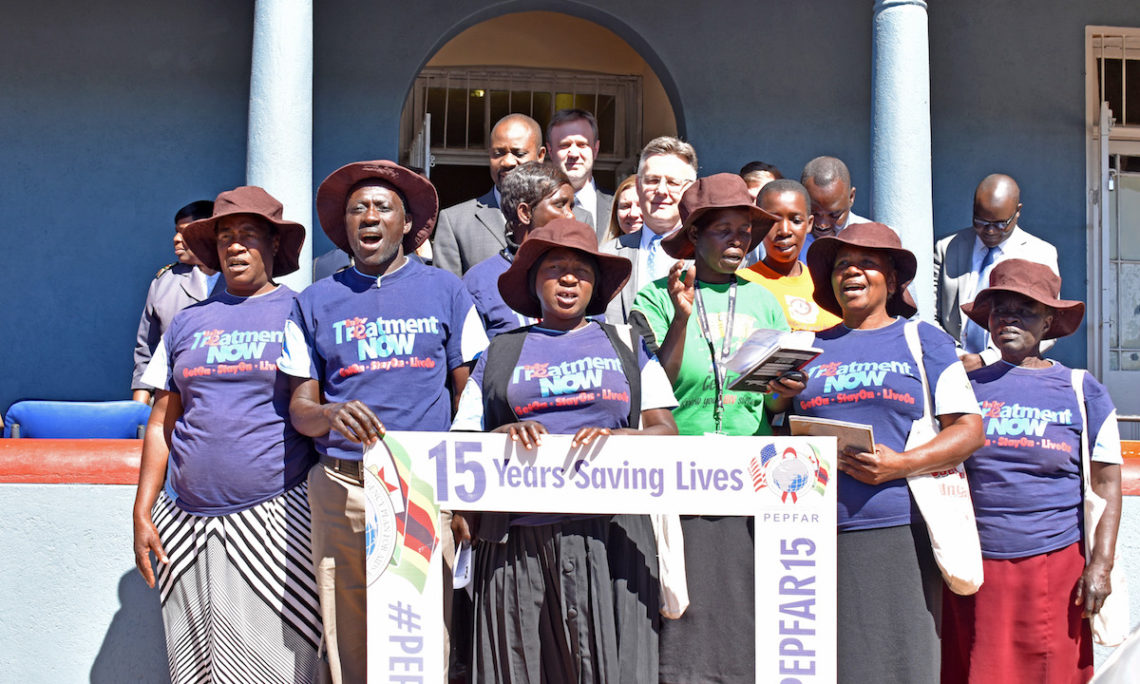 Hopley clinic is one of several sites receiving funding support from the President’s Emergency Plan for AIDS Relief (PEPFAR) through a partnership between the U.S. Centers for Disease Control and Prevention (CDC- Zimbabwe) and I-TECH. It was established in February 2007 by the City of Harare and serves a population of 129,443 with over 17,000 under the age of five.  Nearly 40,000 served at this clinic are women of childbearing age. The clinic is staffed with one head nurse, or sister in charge, and seven registered nurses, five primary care counsellors as well as two nurse’s aides. The staff work with several volunteers who facilitate community linkages in order to retain people in care.

Confirming the U.S. government’s commitment of $150 million in 2018, DAS Harrington said he was happy with progress at the center. “I am impressed by the strategies you are employing to provide HIV and AIDS services,” said Harrington. “PEPFAR is about saving lives so the work you do to ensure adherence to treatment is important,” he added.

supporting the staff establishment.  The current antiretroviral (ART) cohort/regiment at Hopley is 2,078 adults with an average of 80 to 100 people seeking opportunistic infection (OI) and ART services on a daily basis. The other support goes towards clinical HIV mentorship, HIV Testers and Initiators, consumables for HIV testing, tents, furniture, transport for redistribution of commodities, airtime for index case testing and defaulter tracking, as well as training in HIV management.  The PEPFAR program also recently added two temporary testing tents on the premises as well as staff to carry out the tests.  The additional tents are meant to ease the burden caused by the increased number of people seeking services at the clinic.

During the tour, DAS Harrington took time to interact with volunteer community linkage facilitators (CLF) and case care workers among other health personnel. The CLF are responsible for identifying defaulters and linking them to care. The facilitators explained the nature of their work.

“Some people provide wrong contact details making it difficult to trace them,” explained Barbra Zambara, a community linkage facilitator. “However, through experience, we have been able to identify many by describing them and they are eventually located and linked back to care.”

Sister Mehluli Ndlovu said technical support from PEPFAR and I-TECH had strengthened their back to care strategies.  Despite difficulties, 393 defaulters were identified between October 2017 and March 2018 and 185 of these individuals were successfully linked back to care. Ndhlovu acknowledged that PEPFAR support is critical given the adoption of the “Test and Treat Strategy” adopted by the government of Zimbabwe.

The United States, through PEPFAR continues to support the Ministry of Health and Child Care to attain epidemic control. Established in 2003, PEPFAR marks 15 years of saving lives evident in the ever increasing support towards the national response to HIV and AIDS.