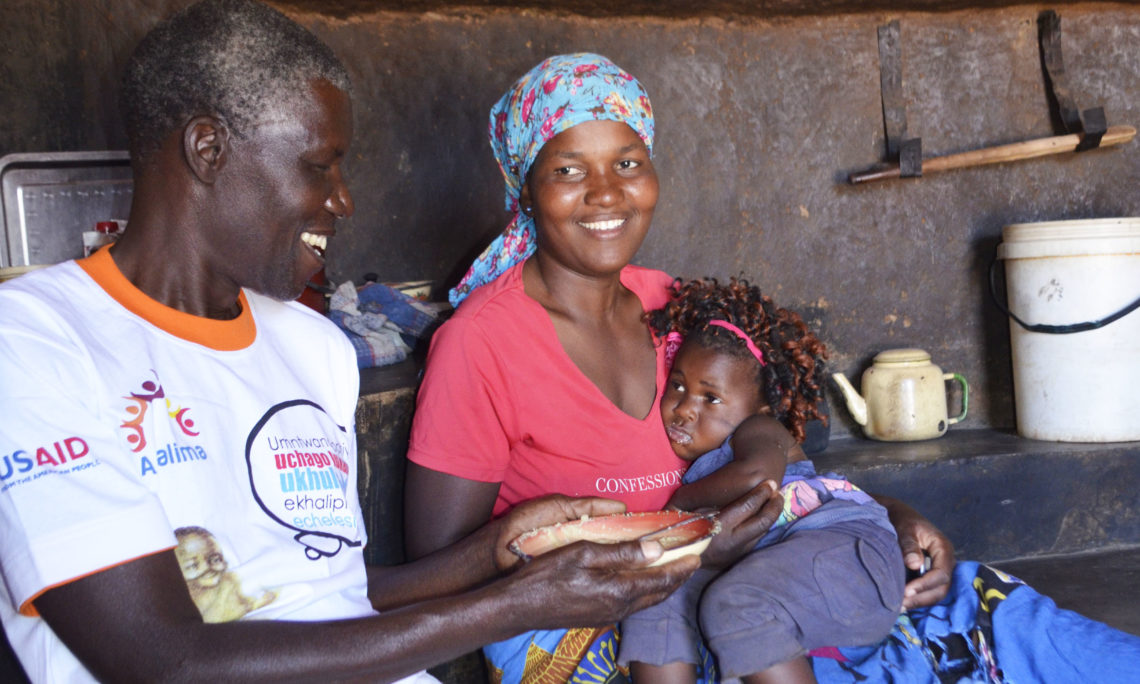 Tsholotsho, 20 September 2017: An activity funded by the United States Government, through the U.S. Agency for International Development (USAID), is making strides in improving food security and nutrition in North and South Matabeleland, Zimbabwe. The activity—dubbed Amalima—takes its name from the Ndebele custom by which communities come together to help each other engage in productive activities such as land cultivation, livestock tending, and asset building.

Under the leadership of CNFA (Cultivating New Frontiers in Agriculture), an international non-profit organization specializing in agriculture and food security, Amalima is helping communities improve access to food, build resilience to shocks, and bolster nutrition and health among mothers and children in Tsholotsho, Gwanda, Mangwe, and Bulilima districts.

“Through the great work of Amalima and its partnerships with local communities, child malnutrition actually decreased during the height of the El Niño-induced drought,” said U.S. Ambassador Harry K. Thomas, Jr. “The United States is proud to partner with the people of Zimbabwe to build long-term community resilience against future droughts through the Amalima project.”

The Ambassador—along with members of the CNFA Board of Directors, USAID Zimbabwe Mission Director Stephanie Funk, and Amalima Chief of Party David Brigham—was part of a delegation that visited a number of Amalima-supported projects this week, including a food distribution at Nkunzi Primary Health Centre, a rehabilitated dip tank, a village savings and lending group, a conservation agriculture plot, and a Community Health Club.

“This five-year program will have helped more than 60,000 households by its completion in 2018,” said CNFA President and CEO Sylvain Roy. “To date, Amalima has distributed more than 7,000 metric tons of supplementary food to more than 45,000 mothers and children at 59 rural clinics and 28 secondary distribution points. These food distributions are crucial to address chronic malnutrition during the first 1,000 days of life—a critical period for preventing stunting as well as physical and mental disabilities associated with malnutrition.”

So far, Amalima has worked with communities to construct or rehabilitate 78 assets aimed at building drought resilience—including dams, irrigation schemes, and dip tanks. The activity has also formed or strengthened 670 village savings and lending groups, which now hold a combined total savings of more than $639,000.

Amalima also has facilitated the establishment of 316 Community Health Clubs (CHCs) which have trained more than 6,000 people to improve household sanitation and hygiene. To date, CHC members have constructed 205 latrines, more than 2,000 tippy taps, and 435 refuse pits.

Non-governmental organizations serving as implementing partners in the Amalima project include the Organization of Rural Associations for Progress, Dabane Water Workshops, International Medical Corps, the Manoff Group, and Africare.

For more than 30 years, the American people, through USAID, have contributed over $3 billion in assistance to Zimbabwe. Current projects include initiatives to increase food security, support economic resilience, improve health systems and services, and promote a more democratic system of governance.