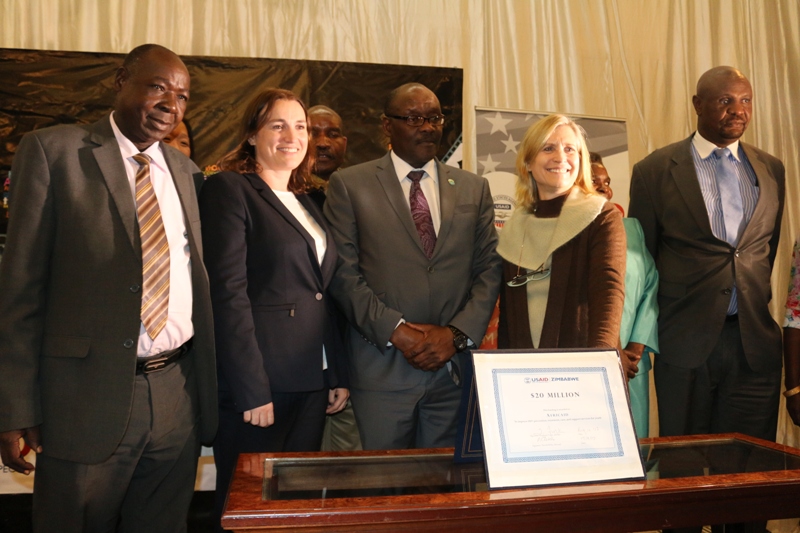 Harare, 10 August, 2017 – Today at Meikles Hotel in Harare, the U.S. Embassy, acting through the U.S. Agency for International Development (USAID), and Zimbabwean private voluntary organization, Africaid, signed an award of $20 million to improve HIV care and treatment for children, adolescents, and young people.

At the event, USAID/ Zimbabwe Mission Director Stephanie Funk stated: “USAID is proud to partner with Africaid to help Zimbabwean children and adolescents live longer, healthier lives. The United States stands with the people of Zimbabwe in an effort to end the HIV epidemic.”

The signing ceremony today commemorated and launched USAID’s support to Africaid of $20 million to scale up and expand its innovative Zvandiri model for five years, from 2017 to 2022, in 22 priority districts in Zimbabwe. The Zvandiri model seeks to improve children’s, adolescents’ and young people’s experience of HIV testing services, diagnosis, linkage to care, disclosure, treatment access, adherence, and retention in HIV care. This will be achieved through a combination of community and facility-based interventions including community support groups, community outreach, child and adolescent-friendly clinics, and Community Adolescent Treatment Supporters (CATS). The CATS work closely with health facilities, families, and communities to respond to the unique needs of young people living with HIV.

Africaid Executive Director Nicola Willis stated: “Africaid is thrilled to receive support from USAID to scale up the Zvandiri model in partnership with the Ministries of Health and Child Care; Primary and Secondary Education; Public Service, Labour and Social Welfare; and the National AIDS Council. Our work will help achieve epidemic control by increasing the number of children and adolescents living with HIV who know their HIV status, getting more children and adolescents living with HIV on treatment, and helping those on treatment to adhere well to their medication and have suppressed viral loads.”

The U.S. President’s Emergency Plan for AIDS Relief (PEPFAR), through USAID and the Centers for Disease Control and Prevention (CDC), has provided nearly $1 billion to Zimbabwe over the last decade for HIV prevention, care, and treatment services. PEPFAR has contributed to major successes in the fight against HIV in Zimbabwe. The annual number of HIV-related deaths has declined 70 percent since 2006. The number of new HIV infections each year has decreased 67 percent since 2003.

Africaid is committed to improve the quality of life of children, adolescents and young people living with HIV.