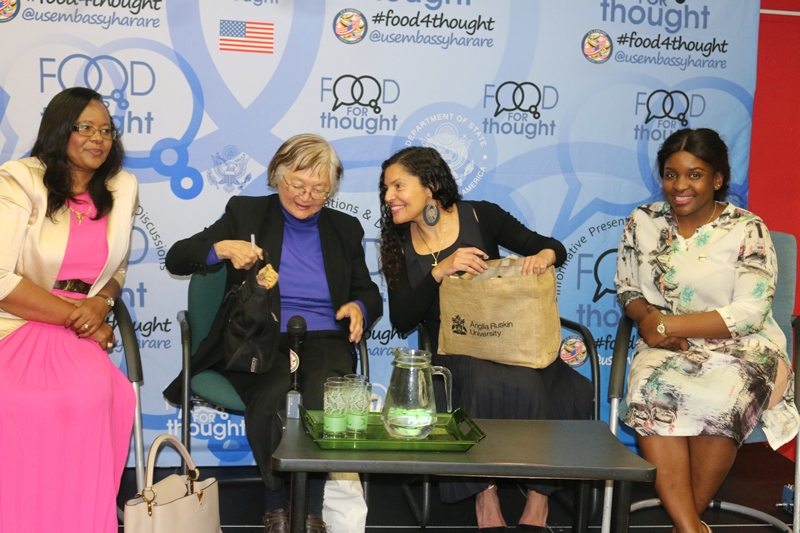 Harare, August 9 2017: Women must redefine the meaning of freedom for today’s generation in order to enhance their contribution in an unequal society, a veteran educationist said on Tuesday.

“Today …we are celebrating the past where tens of thousands and millions of women fought and also died to achieve certain things which they thought were important,” said Fay Chung (in picture), an educator who has served in many capacities in Zimbabwe and abroad.

Chung, a veteran of the Zimbabwe’s struggle for independence from colonial rule, was addressing guests at a Food for Thought session held at the United States Embassy Public Affairs Section. The discussion session was organised by women’s group, Munondida Foundation, in honor of National Women’s Day in South Africa.

South Africa commemorates Women’s Month in August as a tribute to the more than 20,000 women who marched to the Union Buildings on August 9th 1956, in protest against the extension of Pass Laws to women. In 1995, the Government of South Africa declared August women’s month, with the 9th of the month being celebrated annually as Women’s Day.

Chung, who led the renewal of the primary and secondary school curriculum soon after Zimbabwe’s independence in 1980 before joining the United Nations Children and Education Fund (Unicef) as head of the Education Cluster in New York in 1993, said the values that defined society in the 80s have changed. She cited the example of government officials who responded with anger when they were offered bribes. “Today, they smile, say thank you and put behind their chairs when offered bribes,” she said.

“What has happened is that what made people angry in 1980 is making people happy today,” she said encouraging members of the fledgling women’s group to work to tap on the talents and resources from individuals and institutions around them.  “We don’t need money to work together, we need to ask what ideas do we have and share those in family, institution, society,” she noted.

Bernice Bore, founder of Munondida Foundation said Zimbabwean women were celebrating the day with their South African counterparts under the theme “women in collective formation, shifting the world together as one.“ We chose this day to celebrate because although it is a South African historical tradition we are all women and that history serves to empower and encourage us all because we face the same issues and injustices,” she said. She called for Zimbabwean authorities to emulate South Africa and Zambia who make women’s day a holiday.

Other speakers at the event offered inspirational messages for fellow women.  Teresa Huber, a businesswoman, said her ability to overcome an abusive relationship to transform herself into a successful business woman was in itself inspirational to other women. Married at 16, she decided to turn her life around to get a job as a cleaner at 19, and later a business woman. “What I learnt from life, you have to know what you want…if you listen to your inner voice you can transform the impossible to possible,” she said encouraging others to take small steps towards their achieved goals.  She said “success comes with small habits that you create every day and my secret has always been working hard,” she said.

Dorothy Chanakira, a Chartered Secretary by profession and founder of DK Corporate Training, urged women to take the driver’s seat in their own lives. “Take that driver’s seat in your life and bloom…be grateful for the policies and tradition that are deliberate in creating an environment where we can bloom wherever we are planted,” she counselled.

Munondida Foundation is a humanitarian organisation that seeks rural women entrepreneurship through starting profitable projects, stimulating the already existing businesses and projects but very conscious to vulnerable rural women like widows and divorcees. We are working with the main objective of socio economic empowerment and inclusion of the women and the girl child.- ZimPAS © August 9th 2017